Laser Dolphin [.99 / HD] is a criminally under-produced game plagued by issues that wouldn’t be permissible if Laser Dolphin was anything else but a mindlessly fun game about a dolphin with a laser gun strapped to its back.

It’s obvious that Laser Dolphin is a game built on a tight budget or the end product of a rookie game development team. Its animations are stiff, while the story presentation is even stiffer; the assets are endlessly regurgitated, the level design is haphazard, and the action is loose, unpolished, and lacking substance, control, and refinement.

But, again, this is a game about dolphins with laser beams on their heads, meaning that you control a dolphin with a gun attached to its spine. I can’t quit pushing this point because it’s the sole reason why I keep being drawn back to Laser Dolphin and see it in a positive light. It embraces its humorous title in both style and tone, and expresses these two defining characteristics with its mechanics. 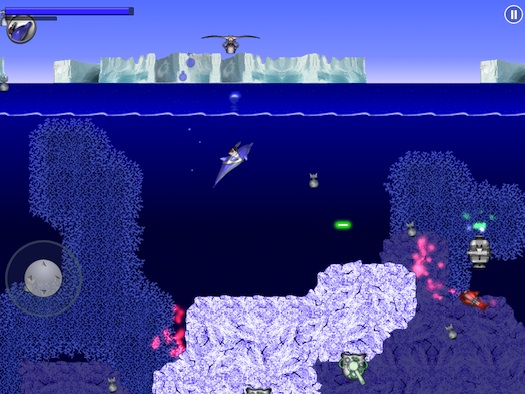 Presented in 2D, Laser Dolphin puts you in control of a dolphin in search of an undersea void that leads to the next area and then the next. The hook is within the gun strapped to its head, which can, of course, be powered up with a variety of explosive-laced pick-ups that dot the game’s minimalistic landscapes.

With a flick of a virtual stick, you can rotate and move the dolphin wherever the level’s borders allow you. A troubled physics engine gives you a measure of momentum as you progress, which in turn, can give you the speed needed to hop out of the ocean for tricks or even traversal when the waves meet the horizon.

While moving, you can also shoot lasers with taps from your opposite hand, which makes Laser Dolphin something of a dual-stick shooter, minus a true second stick. This is where the game suffers. Often Laser Dolphin isn’t quick to understand your secondary input, so it’s hard to shoot and move at the same time — a requirement, I should add. 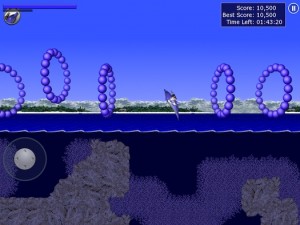 In the worst cases, the dolphin will refuse to turn towards where you want it to shoot. In the best of cases, you’ll fumble with the movement stick while your right hand hovers over all the game’s action, obscuring the field of view.

And it’s important to see a level; each one is laced with enemies, most of which shoot back at your dolphin.

The good news is, I suppose, that your health meter is rather generous and the game doesn’t require absolute enemy domination. If you’re good at moving, you can simply push through the groupings of vicious sharks, spore-spitting flora, and rocket-equipped fish and bomb-dropping pelicans.

Of course, pretending that the enemies don’t exist isn’t the most satisfactory way to play through the game. If anything, these monsters are the expression of the game’s over-the-top style and tone, and as the laser-equipped dolphin, you want to be able to destroy them with your lasers, bullets, and rockets. That’s kind of what’s promised. And when the game is cooperating and you’re hitting on all cylinders, it does feel great. Just don’t go into it expecting perfection or polish — you’ll get neither. 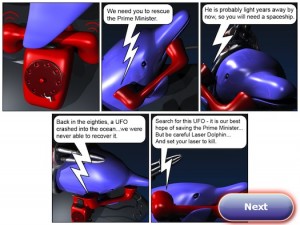 Laser Dolphin tries to conjure Adult Swim’s Robot Unicorn Attack [.99 / HD]. The hilarious titling and embracing of the laser dolphin vision is definitely its strongest hooks, just like Robot Unicorn Attack’s are its unicorn and jumping, but Laser Dolphin is missing some key components that could make it truly, truly good. As it is, it’s unpolished, dull in places, and the action doesn’t feel right.

But… dude, it has a dolphin with a laser strapped to its back.

I know! Anyway, give this a spin if you’re looking for some mindless fun. If you require complexity or depth, or solid mechanics, this definitely won’t be up your alley. As a side note, steer clear of the “HD" version, it upscales poorly.