It’s hard to say which cliche best applies to Dark Dot. Good things come in small packages? Don’t look a gift horse in the mouth? That’s the beauty of cliches — they’re all so universal. The beauty of Dark Dot [Free], on the other hand, is that while tiny, it’s well crafted, fun and totally free. If you have an iPad, you should be downloading it right now.

But perhaps you want to know a little more about the game. If so, then think of Dark Dot as the result of a clandestine meeting between vertical shooters and line drawing games. You control an army of darklets led by the Darkest of Terrors, affectionately known as ‘Dot.’ You can corral your darklets into formation by drawing shapes around them. They spread out or squish in to fill the shapes you draw, and fire from their new positions. All the while, they march over a constantly scrolling background as their elemental enemies fly by. 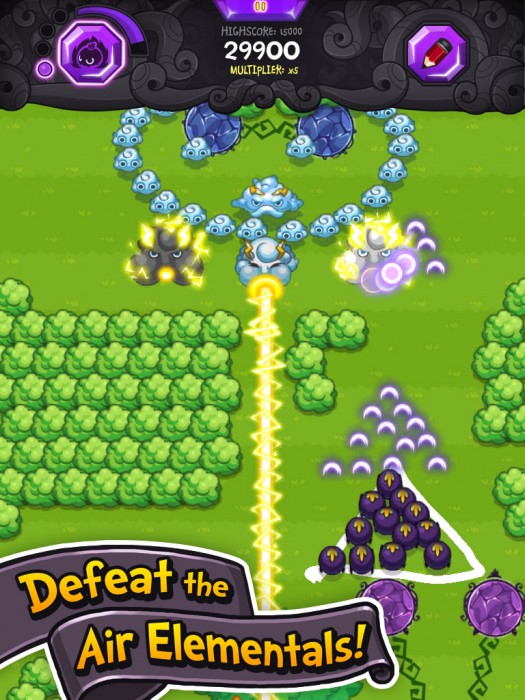 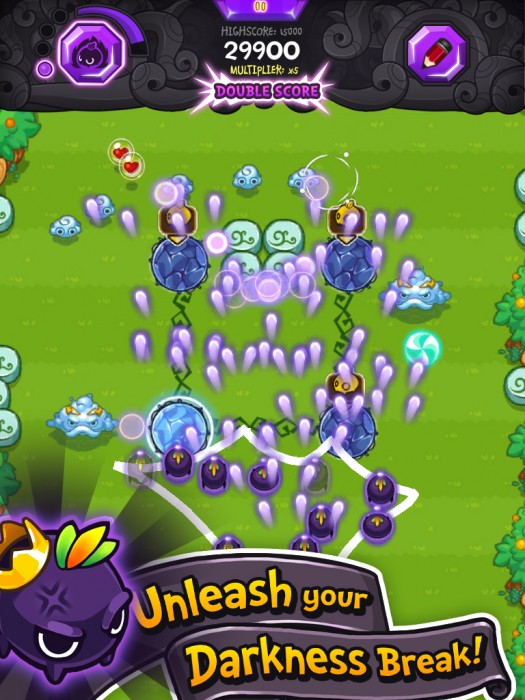 You can pinch, spread and twist your formation around at will, giving yourself more coverage to shoot or tightening up to concentrate your fire. Your individual darklets may take a bullet for you and expire, but as long as you have at least one left the army marches on. Each darklet gives you one projectile, though, so lose too many and you’ll be practically unarmed.

You fight an army of air elementals led by the Cyclone King, who has grievously insulted the honor of the head dot. Most are content to simply fly around, occasionally hitting your troops if they get lucky. But some are more vicious, sending out gusts, cyclones and huge blasts of lightning. You can draw and drag your way around the enemy, and collect hearts to revive fallen darklets.

The drawing mechanic seems like a fantastic innovation for the genre, but Dark Dot never takes it very far. Most of the game can be completed by drawing an oval and resizing it as necessary. Occasionally you’ll run into Aether Chargers, pads laid out in simple formations that you need to match. Position darklets on each of them to charge up your Darkness Break, which makes you invulnerable, doubles your score temporarily and unleashes a huge barrage of shots. The chargers also increase your score multiplier, so collecting them is a must for the high score seeker.

It’s possible the formation drawing would get more complex in time, but we’re never given the opportunity to find out. As I said, good things come in small packages and this one is tiny — only four levels, and one’s the tutorial. The levels themselves are reasonably long, and you can challenge yourself with a three-star ranking system and local high score, but it’s over all too soon.

And that’s the price of Dark Dot. There are no ads, IAP or hidden costs, but there’s also not that much game. Don’t let that discourage you, though. What’s here is absolutely adorable, with great art and music, and every bit of polish that could be packed into its tiny frame. Let’s hope that GAMBIT Game Lab comes through with the hinted-at follow up, but as it’s an international research initiative, I’m not sure it’s big on sequels. So in the meantime, enjoy this gift horse thoroughly. And pop by our discussion thread to tell us what you think.