First there was Modern Combat: Sandstorm [$4.99 / HD] which we described as one of the most impressive gaming experiences on the App Store at that time.  Next came MC2: Black Pegasus [$6.99 / HD /  Free], which we called " A new standard in online multiplayer". Now, Gameloft has released their much anticipated third installment, MC3: Fallen Nation [$6.99], which although not revolutionary, is easily one of the best first-person shooters available for iOS devices.

This release is named “Fallen Nation" because America is under attack. The enemies are KPR (Korea, Pakistan and Russia), who have declared war on America and invaded US cities, reportedly destroying Chicago. Anyone familiar with the earlier games will find more of the same non-stop action in this military shooter, but Gameloft have extended their previous efforts to ensure this latest release is the best in the series.

Because this game has so much going on, we’ll focus primarily on highlighting the new features. If you’re not familiar with the earlier games, you might want to read the review links above. 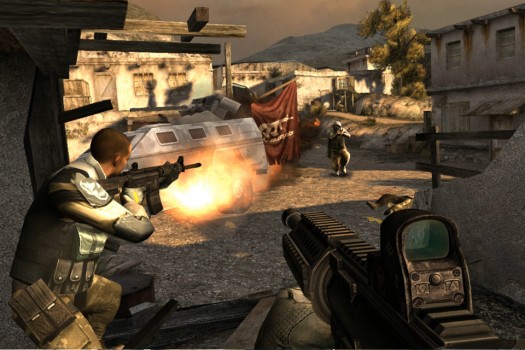 The single player campaign has 13 missions and four levels of difficulty, with combat in different vehicles, settings, and six different countries. There are plenty of cinematic cutscenes between gun-fights to shape the story-line, some of which require swipes when directed. The voice-over acting sounds good considering Gameloft’s previous efforts, and the graphics and level of detail in the levels is already being praised as “better than MC2" in the games busy discussion thread.

The highlight for many players will be the expanded multiplayer mode which is available via local WiFi or online via Gameloft Live. It now supports up to 12 players, compared to 10 previously, and delivers six much larger maps, which is more maps than MC2 had at release. Bluetooth multiplayer mode, which was available in MC2, has now been removed. Some users have experienced lag at times, which has caused stuttering graphics, but the general indication is that it’s nothing unreasonable.

Seven multiplayer modes are provided. The four MC2 modes are still present (Battle, Team battle, Capture the flag and Defuse the bomb), but now there’s also “Manhunt"  where you hold a flag for as long as possible, “Zone control" where you capture and hold locations, and “Destruction" where one team defends multiple devices from an attacking team. Multiplayer mode also has a list of challenges to complete, like achieving a certain number of head-shots, beating each game mode, and achieving the required number of kills with each weapon / attachment. 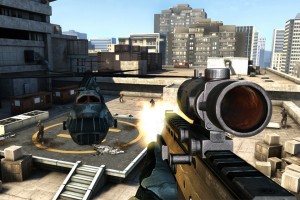 By killing other players and completing objectives and challenges, you’ll gain the experience points (XP) necessary for promotions to higher ranks. This is important because your rank now determines which new weapons, attachments, equipment, and skills are available in the armory.

In multiplayer mode, you can pick one skill per weapon kit. A gun expert loads his weapons quicker, an athlete runs faster while an anatomy scientist heals in half the time. The meanest skill is “One more thing", which drops an incendiary grenade upon death, as a good-bye present to anyone nearby, like the person who shot you.

The expected diverse arsenal of weapons is available, plus equipment like remotely activated C4 explosives, sensors to display position of enemies, radar jammers, mines, and camouflage to avoid satellite scans. However, the process for unlocking weapons has changed, with guns being unlocked progressively once your character reaches certain levels while in-game currency is used to buy ammunition or attachments. That’s right, you can now add various attachments to customize your weaponry, like: Red dot sights, thermal scopes, and suppressors, which help you stay invisible on enemies radar while shooting.

There are two forms of in-game currency: Blue credits are used to buy or upgrade items in the single player shop, or to unlock items in WiFi multiplayer. Gold credits are used in online multiplayer, to unlock items in the online armory. You can buy additional credits as an In-App Purchase, but this is not really necessary as playing the game can yield the same results without extra cost. 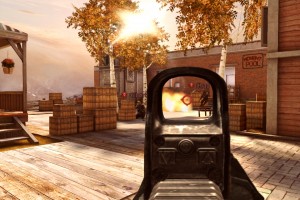 Kill signatures have been added, so you can unlock and choose a message, picture, background and sound to be displayed to your victims after you kill them.  So when your opponents die, they might get a message like: “PWNED!" or “Would you like fries with that?"  along with a flatulence or baby crying sound effect. It’s a final slap in the face for your dead opponent.

Gameloft has added rewards for killing sprees this time around as well. In multiplayer mode you can earn “kill-chains" by killing multiple enemies without dying. These kill-chains can be used to buy military support. For example, three kill-chains will get you a satellite scan, showing all hostiles briefly. You can also request air strikes, turret deployments or helicopter / bomber support. With 20 kill-chains, you can obtain the much coveted nuclear missile and drop this WMD to end the conflict in 15 seconds.

There are three different control options, including “Classic Controls" like MC2 (but with a new sliding move by pressing crouch when running), but this set-up is not the default.  You can adjust the sensitivity of the controls, which was handy as I didn’t like the default controls at all, finding them too fast and floaty and the sprint button was in an uncomfortable position. Fortunately, there’s an option to customize the position of each control individually, although this is hidden away in the pause menu. It’s worth taking a few minutes to get the controls right for you.

Your progress and ranking is stored on Gameloft’s servers, so even if you delete the game, you can re-install it and resume without needing to start over. This means you can login from another device if the game is installed. And a multiplayer headquarters menu now presents all your stats, leaderboards, challenges, match history, and military support options. Finally, there’s now an online armory where you can save your weapon sets (primary, secondary, weapons attachments and extras like equipment or skills). Additional weapon kit slots can be unlocked. This isn’t as good as having direct access to all weapons, but it’s still nice to have this ability.

A few teething issues have been reported, with some ranks being listed incorrectly / inconsistently or progress being lost altogether. This is a major inconvenience which Gameloft is likely to investigate as a priority. And if you have a hyphen in your Gameloft Live login (as one of our editors does) you may have trouble logging in for online multiplayer, so avoid using dashes if you’re signing up.

This Universal game is larger than most and requires additional room for the install process, so gamers all over the world are busy deleting other large games to free up a couple of gigabytes. If you want to play first person shooters on your iOS device, Modern Combat 3: Fallen Nation is a must-buy game, so start making room for it.  Although, with Gameloft  reportedly committed to releasing frequent updates sooner this time around (in contrast to previous versions), we may have to delete even more games for the future updates.