With the proliferation of camera-equipped smartphones that also double as mobile gaming systems in the last few years, the amount of augmented reality apps and games has surged. While there are a ton of ingenious non-gaming ways to use AR on your smartphone, the vast majority of the games that used the technology boiled down to slapping some graphical assets onto your device’s camera view and calling it a game, with little regard for how the augmented reality portion actually affected or enhanced the gameplay.

One title that bucked that trend and changed how I feel about most AR games was last year’s ARDefender [99¢] from French developer Int 13. ARDefender had you printing out a special diagram from the ARDefender website (or as we’ve come to find, just displaying the diagram on a separate device or computer screen) which would then be read by the game using the camera on your iPhone or iPod touch. The game would create a tower on top of this diagram, making it appear that it was actually there in the space where your camera was pointed. Then enemies would come after this tower in waves, and you’d use an assortment of weaponry affixed to the top of your tower to fend them off. 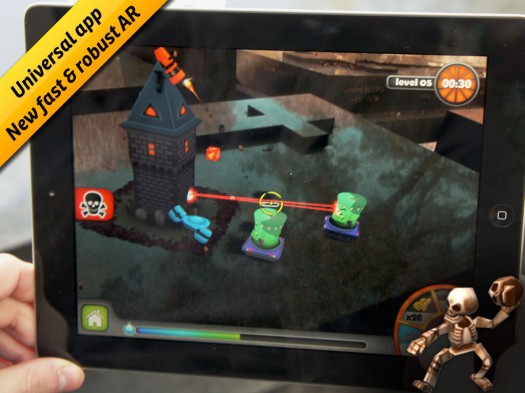 Essentially, ARDefender was nothing more than a tower defense game at the most basic level, but the augmented reality portion was so convincing and the technology worked so well that it really became quite a little showpiece for what was possible on an iOS device. Plus, while simplistic, the actual gameplay involved was also pretty darn fun, which didn’t hurt either.

Now, just a little over a year after release, and ARDefender has received a fairly substantial update just in time for Halloween. First of all, the AR engine used in the game has been upgraded, and ARDefender now runs at a solid 60fps on an iPhone 4 or iPad 2. Also, it now has high resolution graphical assets for the iPad and Retina Display devices. The game looks incredibly sharp and ultra smooth now, as these improvements have really made a big difference.

Additionally, in celebration of the holiday today, ARDefender now has an entire Halloween theme. Your tower structure now looks more like a sibling of the Bates Motel and the enemies who will be swarming the tower include skeletons, pumpkin heads, laser-shooting Frankenstein’s monsters, witches, and more. It’s all quite well done, but if Halloween isn’t your thing then you can easily switch back to the classic theme if you want.

Besides the technical upgrades and Halloween theme, ARDefender also received some other really nice improvements in this latest update. There are now new towers to unlock and use, as well as a couple of new upgrades like a defense drone that will fly around the battlefield and assist you by blasting away at approaching enemies. You can now save your game’s progress, and there are also 22 achievements to unlock, but unfortunately they are just in-game and not tied into Game Center. Finally, a host of smaller gameplay tweaks and optimizations rounds out the update.

ARDefender is definitely my top augmented reality game for the iPhone. It would be nice if the developers expanded on the solid foundation with more game modes or some sort of campaign, but what’s here now is still a lot of fun. With this new update it’s an even better experience overall, and if you own at least a 3rd generation device or higher that’s equipped with a camera then ARDefender is a dollar well spent for both a fun gaming distraction and something cool to show your friends.