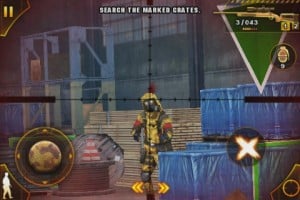 Back when rumblings of the iPhone hadn’t even crossed the minds of Apple rumor hounds I rocked various cell phones and always knew Gameloft as “that company with lots of brick breaking games for all kinds of different phones". With the advent of the iPhone, the debut of the App Store, and Gameloft’s first entries into said uncharted digital territory, I half expected this mental image of mine to persist. It is amazing to me that in the span of barely over a year Gameloft went from simple solitaire and match three games to providing us with one of the most immersive first person shooter experiences on the iPhone to date.

Modern Combat: Sandstorm [App Store] is by far one of the most impressive gaming experiences I’ve seen on the App Store, and easily is able to hold its own when compared to the technical accomplishments of other remarkable efforts in pushing the iPhone to its limits like Real Racing, Doom Resurrection, and others. Featuring multiple full motion video cut scenes all of standard Gameloft quality, complete in-game voice overs, impressive AI, top notch graphics, fluid frame rates, and controls that even surprised this skeptic of virtual analog sticks. 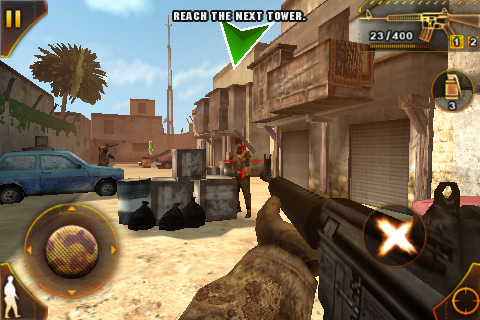 The game begins like a lot of console first person shooters where you’re put through a “basic training" of sorts that gradually teaches you the different controls, weapons, and techniques of the game while making you feel like you’re playing a game instead of a tutorial. The default control scheme works quite well, a virtual joystick is in the bottom corner that controls your movement, and swiping anywhere on the screen controls your view. In the bottom right corner is a button to fire, and whenever you can do context sensitive things like jump off a ledge or toss a grenade back at an enemy another button appears in the bottom center of the screen.

Framing the rest of the screen are buttons that allow you to crouch, zoom in to aim through the sights of your gun, throw grenades, change or reload weapons, and pause the game. Other control options include splitting the screen in half, touching the left side of the screen controls your movement and the right controls your view. Tapping on the right side of the screen also fires. You can also use dual analog sticks, then tap anywhere on the screen to fire. The sensitivity can be tweaked and the Y-axis can be inverted regardless of which option you choose. 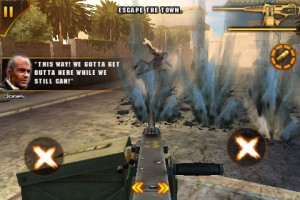 If you follow Touch Arcade, you probably know by now that I’m generally not a fan of on-screen virtual controls. They usually feel clunky and often lack the precision required in a lot of games that come with them. It’s completely refreshing, and honestly a little surprising how much Gameloft managed to nail the controls of Sandstorm. It’s great to just be able to say the game is fun to play without the qualifier “…as best as can be expected with on-screen controls".

Sandstorm features the same generous auto-aiming system that appears in other Gameloft shooters. If this assistance grinds your gears, you will be happy to know that there’s an advanced options screen where you can toggle it on and off along with the in-game blood, lefty mode, and screen flip.

The plot of Sandstorm won’t be winning any awards for originality, as it’s a fairly cookie cutter premise centralized around conflicts in the middle east, evil terrorists, and the trials and tribulations of your military squad as you fight your way through the various bands of enemy combatants standing between you and the various objectives. The story gets the job done, and your squad, complete with total voice-overs for all dialog really adds to the overall immersion of the game.

One clever thing Gameloft did with voice-overs is the way the mission briefings work. Between each level, you’re given an overview of the situation your squad is in, the objectives, and your rules of engagement that are all wonderfully narrated. As you’re listening to the briefing of the upcoming mission, the next level is loading behind the scenes. When the narration is finished, you hit next and play the level. These sneaky loading screens make the game feel as if it almost has no load times at all.

The AI in Sandstorm is fairly challenging, with enemies often taking cover, advancing when you take cover, manning nearby stationary machine guns, and even tossing grenades. This really goes a long way in making Sandstorm actually feel like a game where you need to be intelligent about cover and which enemies you shoot first, as opposed to most first person shooters on the iPhone that feel a bit like a shooting gallery where you can basically just run and gun your way through most levels without much risk. If you decide to just run out in to the open, guns-a-blazin’ in Sandstorm, you will quickly die. 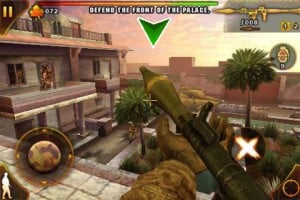 Gameloft games are rarely very innovative, and Sandstorm is no different. If it came with the Call of Duty brand name plastered on it, you would be hard time knowing it was developed by Gameloft instead of Infinity Ward, makers of the Call of Duty series. Everything is extremely similar from the objective system to the arrow pointing you where to go next to the regenerative health system where all you need to do is seek cover for a few seconds to regain your strength to avoid dying. I don’t really think this is a bad thing, because the Call of Duty series consists of excellent games, and Gameloft has really done the series justice in this highly inspired spin-off.

Included in the initial launch version of Sandstorm are 10 levels, and I’ve been averaging anywhere between 15 to 20 minutes per level as I make my way through the game on normal difficulty. Each level comes with a variety of checkpoints so if you die you never lose too much progress. What is quite confusing to me is that the game apparently only saves your progress as you complete levels. If you’re 10 minutes into a mission and have passed multiple checkpoints, quitting the game to take a phone call or answer a text message forces you to start back at the beginning. This seems like a big oversight to me, and I hope that this would be fixed in an update.

Speaking of updates, Gameloft has promised a free future update to add online multiplayer to Sandstorm. We don’t have any more details than that currently, but the game does give me some serious Counter-Strike 1.6 vibes. I have no doubt it would makes the dreams of countless gamers come true if the upcoming multiplayer update included squad-based objectives instead of simple deathmatch. After all, they’ve already practically got the texture and model set required for a fairly accurate reproduction of the Counter-Strike map de_dust in game already!

Hands on gameplay video (on easy, and with multiple takes):

Modern Combat: Sandstorm is an excellent game that raises the bar of what is to be expected of future first person shooters on the iPhone, as well as being added to the short list of games with fantastic on-screen controls. The three included difficulty levels should provide a fun experience for first person shooter veterans and newcomers alike, and while I’m not entirely sure how much replay value the game has, there is massive potential in the future multiplayer update.

If you’re at all interested in shooters, or are just looking for a great game to flex the muscles of your iPhone, look no further than Modern Combat: Sandstorm.