Galaxy Pirate Adventure [$4.99] is one of those games that seems to have doubled down on an impressive graphics system while not giving as much attention to the rest of the gameplay. Rest assured, if you’re running Galaxy Pirate on an iPad 2 or iPhone 4S, you will be impressed with how this game looks. However, if you’re expecting a title with an actual story or a novel battle system, you will most likely be disappointed.

Billed as a Space RPG, Galaxy Pirate Adventure follows the son of the Galaxy Pirate King as he sets out on his own adventure. In order to succeed, you’ll have to build up a convoy of ships, which in itself will require cash and parts. The meat of Galaxy Pirate involves taking on missions that fall in one of three general categories: Smuggling, which has you taking commodities to other systems, Pirating, which pits you against other ships with the reward being raw materials, and Mercenary, which is similar to pirating, but you’re rewarding with cash instead of materials.

Once you get past the introduction, the vast majority of your time will be spent undertaking these side missions time and time again in order to build up the materials needed to build and outfit better ships. Galaxy Pirate is grind-intensive, but so are a lot of games in this genre. 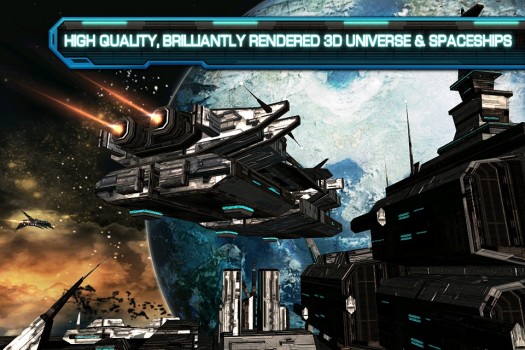 The first thing you’ll notice about Galaxy Pirate Adventure is its visuals. The graphics are absolutely vivid and incredible – especially on an iPhone 4S or iPad 2. This extends to the ship models, starport design, and the overall world. My only complaint is that the visuals really make me wish that there was more interaction with the world.

If you’re thinking that Galaxy Pirate is going to be a free-roaming space game like Galaxy on Fire 2, prepare for disappointment. Despite the similarities in visuals, you actually have very limited control over your ships. All travel between planets is done on auto-pilot, with the only player interaction being on the star map. There’s also not much control during battles either, as the only options you have are to move towards or away from your enemies (entirely 2D movement). It’s almost a shame to have such a beautiful world in front of you and not be able to truly explore it. However, Galaxy Pirate seems to focus more on battles and economy and less on piloting and exploration. 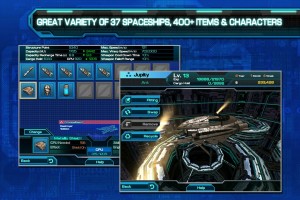 Speaking of battles, Galaxy Pirate Adventure employs a somewhat simplistic rock-paper-scissors battle system. When you encounter enemies, you have a choice of attacking, defending, or recharging your batteries. Attacking and defending drains your batteries, while charging leaves you open for counterattack (but is necessary for long battles). The goal of each battle becomes charging when you’re out of weapon range, defending when you’re attacked, and launching your weapons all other times.

The battle system certainly gets the job done, but it’s a far cry from what some might expect with a space game. I just didn’t find enough variety; once you figure out the basic strategies, every battle plays out the same way with the tougher ones simply being a lesson in patience more than anything else.

Galaxy Pirate Adventure does do a great job offering the player variety as far as being able to outfit your individual ships. You can upgrade everything from shields, to weapons, to even your ship’s firing range, all offering different advantages. At the onset, your ships will not have a lot of weapon and equipment slots, but as you upgrade to bigger and better vessels you’ll be able to customize even further.

Despite the wide amount of customization, I did have some trouble in the early goings with the general lack of information about the ships, weapons, and parts. Thankfully, you can access a simplified help menu that does help with basic stats, but other than that, there’s really not much information to help you.

When released, the worst offense that Galaxy Pirate Adventure committed was with its English localization. Simply put, the translation was extremely subpar – to the point where sometimes you had no idea what the hell is going on. Thankfully, the recently released update fixed a lot of the localization errors. Unfortunately, even though a lot of the simple grammatical issues have been fixed, the story is still left bland and uninteresting. Sure, having a mediocre story doesn’t immediately spell doom for a game, but when Galaxy Pirate classifies itself as a role playing game, the story should be a big part of the experience.

Without a legitimate story, all you’re left with in Galaxy Pirate Adventure are pretty graphics, and a simplistic battle system that is heavy on grinding in order to get any meaningful progression. Once you get passed the slow opening, Galaxy Pirate does pick up in terms of  progression, but I imagine that some prospective gamers will lose patience before it gets to that point. I’m sure that there are plenty of folks out there that will be willing to look past all the issues in order to enjoy those gorgeous visuals on a portable device. However, for me, I was expecting something with a little more depth.