In 3D Pixel Racing [$1.99] the car graphics look extremely blocky – there’s simply no anti-aliasing (or smoothing of the edges) …but that’s not a bad thing, because it’s completely intentional! This car racing game uses 8-bit pixelated graphics to depict the 3D cars, tracks and menus, so they look like they’re constructed from tiny blocks of Lego. You might think this sounds like 8-bit Rally [99¢], but no, this is far more pixelated than that.

While the unusual “pixel" graphics are definitely the main draw, there’s also quite a few other features, including 5 game modes, 11 cars, 10 tracks, and various weather conditions, which all sounds really good on paper. However, this game has received mixed feedback in our discussion thread, with the menu system in particular being singled out for criticism.

The developers advise the menu system was ported across from the Wii version and it is, quite frankly, one of the worst menu interfaces I’ve encountered on any iOS game. Basically, two buttons labeled “1" and “2"  are assigned different purposes depending on the screen.  It’s astounding that after investing in a game, producing such interesting graphics, and delivering multiple game modes that anyone would implement a user interface that’s so obviously unpleasant to navigate. As a rule of thumb: If you need to display instructions for your menu buttons, it’s too complex. 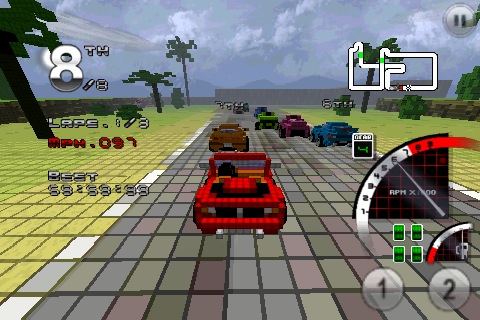 Having condemned the nasty menu system, let’s examine the gameplay. The five different game modes provide a nice range of racing formats, including single race, championship races over five random tracks, and a “capture-the-flag" mode where you gain points by stealing or driving with the flag. There’s also a “Hot Pursuit" mode where you play either a fleeing criminal or a chasing policeman, just like Need for Speed: Hot Pursuit [$4.99 / HD]. And finally, there’s a time trial mode. There’s no multiplayer mode, but five game modes is still a pretty decent offering.

Each of the 11 cars has speed, grip, and handling attributes, with one model being a Formula One vehicle. In addition to day-time / night-time racing, the cars are affected by the weather conditions, including sun, snow, rain and fog, which all affect the amount of tire grip and visibility. Although according to the help screen, rain causes very low visibility, while there’s good visibility in foggy conditions. Remind me not to go driving with those guys! 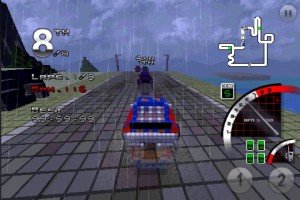 Pitstops are available in Championship and Single race modes, for changing tires and refueling.  An indicator tells you how damaged your tires are, which reduces their grip.  You also have a fuel gauge. If the fuel tank is empty, the car emits smoke and moves jerkily. Pitstops can be turned off in the settings, if you prefer.

The control systems differ depending on which device you’re using. iPad users can choose either virtual joystick controls, or tilt.  There’s no need to select one option or the other, you simply start tilting, or using the on-screen controls. The infamous “1" button is used for brake and reverse, while “2" is your accelerator. Any iPhone / iPod users are limited to tilt controls.

The virtual stick controls are reasonable, but not perfect. If your finger moves too far off the pad, it stops controlling the car. And the tilt controls felt awkward on the iPad, with no option for adjusting tilt sensitivity.  On my first race my driving seemed pretty decent, as I managed to hold an almost reasonable racing line, but apparently I was playing easy mode, with the “drive assist" option set to high by default (Off, Low, Med, High). The car was almost driving itself around corners.

(Trailer from the original WiiWare version)

There were a couple of other issues:  There’s no high score leaderboards, which is unusual for a racing game. This is crying out for Game Center. Also, some options like drive assist, CPU difficulty, and number of laps should really be presented as options when starting the race, not hidden away inconveniently in the options screen. And lastly, the English is confusing at times, like when you press a button and it says “Confirm or continue?"

3D Pixel Racing is a winner in the categories of graphical creativity and delivery of plenty of game modes, but it comes last for user-interface design due to cluttered menus and buttons which make it unpleasant to navigate. This game seems to polarize people, with some loving it and others wanting to delete it. Personally, I’m in the middle.  If you survive the menus and adjust to the controls, there’s certainly some fun to be found, at a lower price than many big-name racing games.