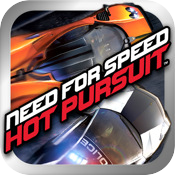 Last month EA Mobile‘s newest entry to their Need For Speed franchise – Hot Pursuit – launched in the App Store. Hot Pursuit toned down most of the things that were aimed at hardcore gearheads and instead focused on a more casual but fast-paced arcade experience. The game is definitely a fun ride, if somewhat shallow, and we generally enjoyed it in our review.

One thing we didn’t like so much, however, was the single-sided career mode in the game. Hot Pursuit is based on high-speed chases with law enforcement, but there was only ever the option to play as the police and not the perp getting chased. This was especially perplexing since EA unintentionally announced during a Japanese media event in October that Hot Pursuit would contain two career modes for a total of 48 events. When it shipped with just one career and 24 events, we were a little disappointed.

This is no longer an issue now as EA has apparently tracked down the missing half of the game and issued it in an update earlier today. There is now an additional career mode for the “racer" that contains 24 events over 4 different modes with an entirely new set of achievements to obtain. The racers share many of the same cars as the cops do, with some exclusive ones as well, and you can now change the color of your car when playing as the racer. You can also use the racer’s different arsenal of weapons – overdrive, jamming, and oil slicks – when trying to ditch the boys in blue.

I must admit I’m not typically a big Need for Speed fan, although there have been entries in the series over the years that I’ve really enjoyed. But I’ve been having a great time with Hot Pursuit on iOS mostly because of its stripped-down nature and simple focus on driving. Maybe I was their target audience for this game. Still, it got kind of old always having to play Johnny Law when sometimes you just wanted to be the outlaw breaking the speed limit. Now that is finally possible thanks to this gigantic new update. Also, don’t forget that if you have yet to pick up Need for Speed Hot Pursuit that both the iPhone/iPod touch version and the iPad version are currently going for just 99¢ for a limited time.