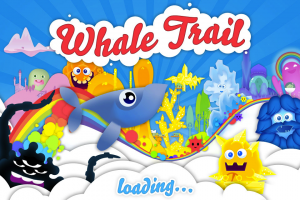 Developer ustwo™ doesn’t really consider themselves game developers, though they have dabbled with their series of “DOT” games, most recently DOT5URBO [Free]. No, most of their success and notoriety is from their utility and entertainment apps, and their extremely well-received interactive children’s app Nursery Rhymes with StoryTime [$3.99].

However, they’re preparing to jump head first into the world of games with their upcoming Whale Trail. A take on the endless cave flyer genre, Whale Trail gets the base mechanics of this type of game just right. You play as Willow the Whale, trying to escape an evil underwater monster who has invaded your ocean home. You realize that a magical whale trail gives you the power to float into the sky and escape his grasp.

This whale trail is fueled by the colorful bubbles that are spread across the randomly generated play field. Your trail is constantly decreasing, so in order to keep afloat in the air you’ll need to collect these bubbles to keep the whale trail chugging along. Mixing things up are the ability to do a loop-de-loop, small turbo whirlwinds that can shoot you along and allow access to higher elevations, and spikey items which will give you temporary invincibility when enough have been collected. Invincibility from what, you ask? From the evil dark clouds that also litter the landscape, and will cause your whale trail to diminish at an increased rate if you don’t avoid them. 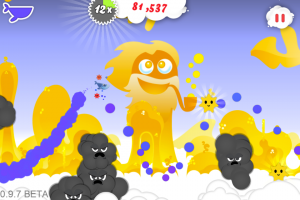 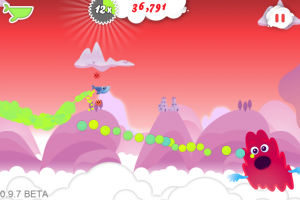 I’ve been playing a preview version of Whale Trail for the past couple of weeks, and so far have really come to adore the game. It doesn’t do anything especially new or crazy in the game mechanics department, though it does have a great “feel” and tugs at you to give it just one more go to increase your high score.

Where Whale Trail sets itself apart from the packs of similar titles is in its stunning visuals. The entire world is a brightly colored, almost psychedelic collection of crazy graphics and sounds. It’s as if The Beatles’ movie Yellow Submarine decided to morph into a video game starring a cute whale. There’s even a catchy folk-rock theme song about Willow the Whale humming along in the background, completing the hippie vibe. No ‘shrooms necessary. Check out the newly released trailer for Whale Trail to see what I mean:

Whale Trail is currently slated for an October 20th release date, and before then there may even be a few new features that sneak in as ustwo™ continues to tweak the game. I’m impressed with it already, and feel like it has the solid gameplay chops to keep you coming back as well as the aural and visual splendor to sink its hooks into you on an emotional level, Tiny Wings [99¢] style. We’ll definitely be giving the final version of Whale Trail a flight through the sky (with diamonds) when it launches later this month, and until then you can drop by our forums for discussion of the game.