When it comes to what makes a good game, I usually boil it down to two basic rules: create a gameplay experience that is fun, and extend that experience long enough to make it satisfying. Monster Island [$0.99 / HD] (and Monster Island Begins [Free / HD]), the latest title from Miniclip, does a great job satisfying both tenets in droves. In addition, its colorful artistic flair, solid gameplay, and interesting in-game store ideas make the game one worth exploring.

At its core, Monster Island is a physics-based puzzler that has you tossing ‘minis’ (basically small alien balls) that have a variety of attributes, with the goal being to take out the enemy monster thugs. Minis range from Blui, a mini that explodes only after it stops moving, to Sticky, a mini that sticks to whatever you throw it at (and will subsequently let other minis stick to it) and so on. Each level gives you a predetermined amount (and type) of minis, and your goal is to simply use them and try to take out the baddies in as few throws as possible. 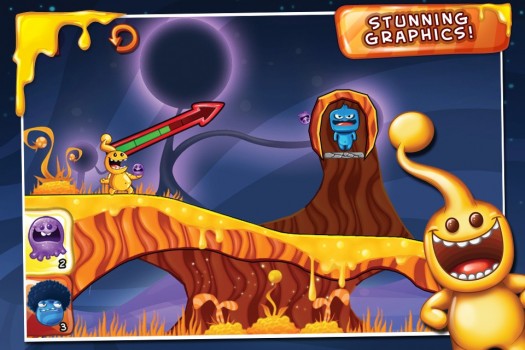 The better you do, the more stars and gold you earn (the gold allows you to buy various items from the store). If you’ve played any sort of physics level-based game (like the all-encompassing Angry Birds) you’ll have a good idea of what you’re getting into. While the setting and minis are certainly unique, the fundamental gameplay doesn’t offer anything particularly innovative.

One thing Monster Island nails is its graphical style. Basically, the entire game is detailed, extremely colorful, and just permeates with personality. Your monster (along with all the other ones you can purchase with coins) certainly has a cute disposition. Also, I just enjoyed the various backdrops, even if they didn’t have an effect on the actual gameplay. Miniclip certainly nails the whole cute alien motif, which I think adds to its overall presentation and approachability.

Another aspect that Monster Island succeeds at is its content. To put it simply, it will be a very long time before you run out of levels to play. Monster Island actually consists of four different islands, each with 70 different levels. Considering that each level has the standard 3 star ranking system, completionists have their work cut out for them. In addition, Miniclip has already stated that new islands are in the works, further expanding out the content. My only complaint is that you have to play through each island before unlocking the next (unless you want to spend your coins to unlock certain islands, or IAP to unlock everything off the bat).

Monster Island does have one option that I don’t find nearly enough in these level-based puzzle games: video solutions. For some gold coins (which can also be purchased as IAP), you can watch a video showing exactly how to earn three stars on a particular level. Of course, since solutions require gold, you can’t simply view each of the hundreds of levels consecutively (unless you spend a lot of money on IAP gold). Also, once you view a solution, that particular level is marked, meaning you’ll always know which of those three stars you sold out on. It’s simply a system that’s well done, and I think should be offered in more games.

With its imaginative art style, large amount of content and decent gameplay, Monster Island is definitely worth checking out for any puzzle aficionados looking for a new title. Also, its in-game store with access to level solutions should keep gamers coming back. Sure, one might look upon Monster Island as just another physics puzzler, but when the game is as fun and as long lasting as it is, who cares?