There’s just something about word games that make you feel like you’re accomplishing something in your free time. You’re not simply killing time; you’re expanding your very mind. Perhaps this is why games like Text Twist and What’s My Word have gone down in the annals (uh, it’s a real word, which you would know if you played more word games, you pervert) of my favorite apps of all time. And just when I had given up hope of finding another worthy addition to that club, Spuzzle, Inc.’s Word vs Word [$.99] has earned its way onto the list. Felicitations all around!

I’m not going to sugarcoat it – this game is going to frustrate you. But if you’re like me/into punishment, you’re going to love it. It’s not only because the words are particularly challenging (finally, another chance to use that SAT dictionary!), but because this is really a logic game disguised as a word game. Words With Friends this ain’t. 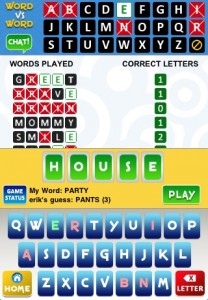 Every time I try to describe this game to my friends, they end up with puzzled looks, but I will attempt to convey how it works anyway. (I’m just cool like that.) Basically, you have to figure out a secret word in the least amount of guesses. You can play easy (3- or 4-letter words), medium (5- or 6-letter), or hard (7- or 8-letter). The game gives you two keypads. The first is where you enter your guesses; the second keeps track of which letters are valid and which letters have been eliminated.

Let’s say the secret word is ‘cat,’ and you guess ‘tug.’ The game would tell you that you got one letter correct. As you can see, it won’t tell you if you have the order of the letters correct, adding to the challenge. From there, you need to determine which of the letters was correct, so you might guess ‘get.’ At that point, it would confirm again that one letter was correct, so you could eliminate the ‘u’ and ‘g’ of your first guess. It goes on from there until you solve the puzzle or give up.

You can play the game either solo or multiplayer. In multiplayer, you can create matches with your friends or let the game match you up with somebody online. In either case, you pick a secret word for them to guess, and they do the same for you. You take turns guessing until one of you figures out the other’s word and wins the game.

The issue with multiplayer (as in pretty much every other turn-based game) is that taking turns is, well, incredibly dull. Sometimes your partner will not respond for hours (or, uh, ever) so if you’re looking for fast-paced, action-packed wordplay you are probably going to want to have several games going at once, or play solo. 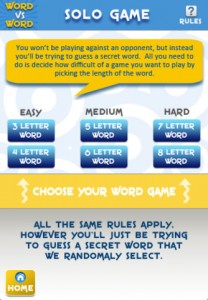 Oh, solo mode! Maybe it is a testament to my loser loner-ness but I prefer solo mode to all others. In solo mode, the game picks the secret word, and there’s no incentive to solve the word in the least amount of guesses (but I have my pride, OK?). That last part is important to note, because sometimes this game is going to throw the most ridiculous words at you, and it’s going to sandwich them in between rounds of elementary school vocabulary words.

Seriously, the game gave me ‘hay’ and ‘eon’ then busted out ‘mEq’ on me. Game, that is not even a word, it’s an abbreviation! What would Scrabble have to say about this?! I thought maybe it was just a fluke, but then after ‘rails’ it gave me ‘haem.’ HAEM. “A complex red organic pigment containing iron and other atoms to which oxygen binds.” I am beginning to suspect that this is all part of an elaborate ploy by my high school chemistry teacher. This is punishment for turning in all those assignments late, isn’t it?

The almost-comically varied nature of the secret words it picks for you really helps keep the game challenging. There are some elements that need work (what, so ‘fart’ isn’t in the game’s dictionary but ‘barf’ will win the round?) but honestly, those elements are minimal. If you’re a fan of word games or logic problems, this is well worth the download, and the fact that it has a well-developed multiplayer system really puts it over-the-top. Serendipitous endeavors, friends!