Ah piracy. Forget the days of violence, scurvy and the constant threat of hanging. We’re talking about the freedom of the high seas, questionable fashion choices and incredibly anachronistic language, savvy? Plunder and the open ocean, that’s the pirate’s life for me.

Powder Monkeys [$0.99] goes blessedly light on the pirate-speak, but otherwise it’s the perfect pirating experience. You can travel the seas, hunt down rivals, capture towns, plunder to your heart’s content and dress up your ever-more ludicrous ship. And you can do it all as a, erm, monkey.

To be fair, Powder Monkeys has a surprisingly thorough back story that delves into the reasons your captain and crew are monkeys and not people. I would have accepted “because monkeys are cute" as sufficient cause, but you won’t have to settle for such shoddy explanations here. 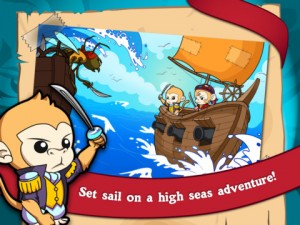 Monkey business aside, Powder Monkeys does an excellent job of dishing up the feeling of freedom that goes so well with playing pirates. The bugs have wronged monkey-kind and you’re on a mission to hunt them down, but you can get to that at your own pace. The rest of the time you can sail your ship around, tapping from a bird’s-eye view, wandering, fighting and plundering at will.

Or, should I say, mostly at will. It’s a dangerous world in this game, and everyone you encounter is up for a fight. Ship-to-ship battles play a bit like handling four games of rock-paper-scissors at once. You have four cannons, as does your enemy. To load them, you select your ammo and tap on your cannon of choice (this works best if you play with both hands). The ammo loads, fires, and either hits the enemy ship if the path is open or smashes against opposing ammo if not. That’s where the RPS feel comes in: your ammo can miss the enemy’s shots entirely, they can collide and both be spent, or they can collide and one can be defeated. It all depends on their relative strength. 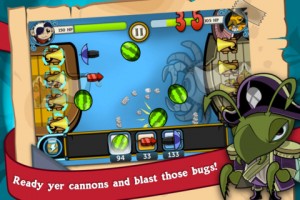 That’s also where the RPS analogy starts to fall apart. There are around 40 types of ammo available to be unlocked. Figuring out what’s best against what gets really complicated, and unless you want to grind you’ll often struggle to have enough silver to keep your supplies of even the most basic ammo up. Of course, there’s always the siren song of IAP to help smooth those struggles… but you can certainly do without.

Powder Monkeys also boasts a robust leveling system. You get experience for fights, plunder and missions, and as you level you unlock new ammo and new parts for your ship. Most are largely cosmetic, but better and stronger cannons are available periodically.

In between spells of fooling around on the openish ocean, you can take on the missions that make up the game’s story and a slew of random side quests. Many of these involve revealing a map, plundering everything in sight and then defeating an enemy, but there’s some variety to be had. Simple stealth and escort missions, timed mazes and other gimmicks pad out the experience.

There are a few oddities that interfere with the entertainment, but they’re largely little things. You can surrender any fight without penalty, sapping a bit of the stress of being surrounded by foes. It’s far too easy to switch to the powerup selection pane when tapping the bottom cannon, something that could easily be fixed. As you level, fights start to seriously burn more (or more powerful) ammo. And the game can get extremely grindy if you want to experiment with lots of different ammo types and don’t feel like putting down more cash.

Otherwise, I’ve been downright delighted with Powder Monkeys. It’s huge, varied, and lots of fun. If you have ever had a hankering for the high seas, this is a good place to start. Anchors aweigh!