There has been a rush to get casual versions of more complex game-types onto the App Store since it launched, and in the case of BlowFish Studios‘ and Crescent Moon Games‘ Siegecraft [99¢], the goal seems to have been to create a casual RTS game with Angry Birds-esque physics.

You take control of one of two weapons throughout the campaign, a catapult and a crossbow. To shoot, you need to slide your finger to move and aim the crossbow, or touch and pull back to shoot the catapult. This works considerably better on an iPad than an iPhone since you have more room to pull back and aim. You’ll have a set number of tasks to complete throughout the campaign, but most fall in two categories: attack and defend. That said, you’ll always essentially be defending, since you can’t move your weapons. Even the attack portions mostly just require you to kill off enemies so your soldiers, which you don’t control, can get through. 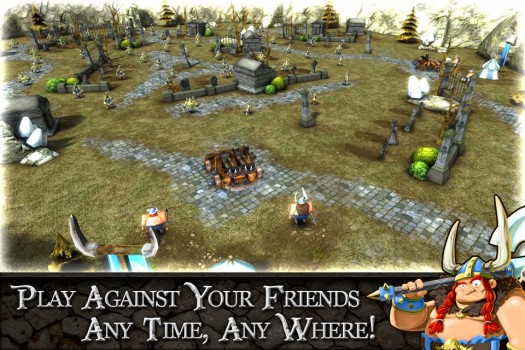 That’s the basic essence of the game and it continues throughout with little deviation. As you progress, you’ll unlock coins to purchase weapon and ammo attachments via in-app purchase or campaign-grinding, but the core of the game doesn’t shift, nor does the strategy you need to employ to win. You can, for all intents and purposes, think of this as a slightly more strategic Angry Birds and you’ll get the general vibe. You’ll get six campaigns from three different races, but they’re all the same when it comes to how you’ll be playing.

The nice part is, you’ll be able to play any level in any campaign at any time. While some of them are easier if you buy weapon upgrades, they’re all available to you at any time. The downside is that the menu screen is a bit confusing and it takes a few more taps than needed to get back to your place in the campaign. It also means it’s not a linear experience, so despite there being words like “races" and “campaign," it’s not a story-driven affair. 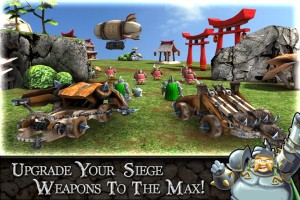 It’s a simple game with simple ambitions, but it can get repetitive quickly because it never feels like you’re progressing through it. That doesn’t mean the game doesn’t get challenging as it moves on, because it certainly does, but the basics of the level design and the skills you need to win aren’t as diverse as they could be.

There are also a few iOS 5 specific features, including cloud saving and online multiplayer. The cloud saving only marks stars received and doesn’t seem to transfer coins earned as far as I can tell, which makes the feature a bit of a bust, since that’s the only reason you’d really want to hop across devices unless you’re concerned with your place on the leaderboards. The multiplayer isn’t exactly what you’d expect from playing the campaign — where the single player is real-time, the online component is turn-based and asynchronous. This makes for much slower gameplay, but it also means you can pick up and play at any time without worrying about staying around the whole time.

More interesting is the iPad specific, single-screen multiplayer, which is far more entertaining. It takes the simple gameplay from the single player and pits you against someone on the opposite side of the screen. It doesn’t take much to get into it and it’s incredibly entertaining for short bursts of time. This is the one facet where it’s nice the gameplay doesn’t require a lot of headwork because anyone can start playing immediately, simply point and shoot and you’re done.

The game looks great, with a few added tweaks to the graphics for iPad 2 owners, and it’s nice it’s available in one single universal version. Even on older devices, the visuals are well done and although the areas are small, the scope is presented in a way you feel like the battles are larger than they really are.

By the end of it all, Siegecraft feels like it could have been much more. While the easy to pick up and play gameplay is nice, I can’t help but think there was more that could have gone into the campaign to create a better sense of progression. Where you start is essentially the same place as where you’ll end up, which is too bad, because the core of the game is interesting enough to warrant a look.