FakePup’s Super Bit Dash [$0.99] is an interesting combination of endless running and platforming all wrapped up in a nice retro-bow. Despite its incorporation of level randomization, Super Bit Dash‘s biggest weakness is the lack of content and variety within its gameplay. However, despite this shortcoming, this casual title still provides an enjoyable experience, assuming you’re a fan of its (increasingly prevalent) retro heritage.

Like a lot of casual games, Super Bit Dash doesn’t offer much of anything in the story department. You play the role of a caped pixelated hero moving through various rooms full of pitfalls and obstacles while collecting coins. Aiding your character is the ability to dash in any direction with a swipe. Each dash burns energy, however, which can only be replenished by collecting the coins that are littered throughout the playing field. You can use your dash ability to break through barriers, fly across chasms, or speed past spikes and other barriers trying to take you out. Since the dash is really the only special power you have (besides a normal jump), coin management becomes imperative as you’ll need to make sure you have enough dash charges for those harder areas. 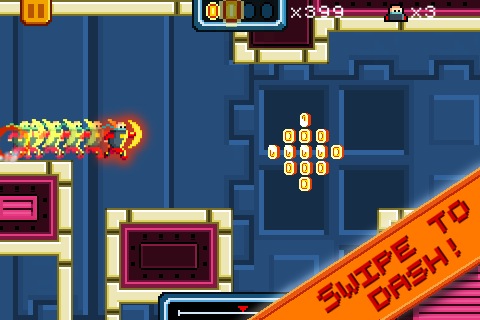 While Super Bit Dash contains a finite number of ‘rooms’ that make up a level, those rooms are randomly selected and combined together at the start of each playthrough. This creates a certain amount of replayability as your gameplay experience will not be exactly the same every time you play. However, there doesn’t appear to be a lot of ‘rooms’ and you’ll quickly start seeing repeats even if they fit together in different orders. Despite the repeats, I thought there was enough variety to enjoy the game for at least a few rounds. I also enjoyed its retro art style as it did a good job paying homage to classic games with its visuals and music while not making it a distraction. Super Bit Dash also offers two different difficulties, each with different sets of rooms depending on your preference, but I’m hoping that future updates will include more rooms (and maybe a different tile set or two as well).

In addition to the two difficulties, Super Bit Dash offers two main game modes: a ‘Classic’ mode which randomly creates rooms and has you trying to reach the end of the course with a set amount of lives, and an ‘Endless’ mode which has you going through every room (of both difficulties) with only one life until you die. The gameplay doesn’t particularly change with either mode, but it’s nice to have both options nonetheless. Otherwise, the vast majority of your motivation will be centered on the leaderboards, as each run will be scored based on long you last and how many coins you collect.  For folks that like this sort of play style, Super Bit Dash will keep you engaged. However, if you’re the sort of gamer that needs a more concrete feeling of advancement, Super Bit Dash might not last longer than a few playthroughs for you.

In the end, Super Bit Dash is a nice little casual game that does a good job of filling the role of a title offering short bursts of quick gameplay with not much else. The combination of platforming and endless running, while not particularly innovative, still provides a good gameplay experience when combined with its somewhat randomized engine. Whether or not you’ll actually enjoy Super Bit Dash depends on if you’re willing to look past the limited variety of the gameplay (and the retro graphics, depending on your taste). If you don’t mind these things, then Super Bit Dash may be worth checking out.