Lately, I’ve been on the lookout for freemium games that offer up more than the usual. I feel like I’ve built and bred just about everything under the sun, ya know? Forever Drive [Free], though — Supermono knocked it out of the park with this one. It’s free-to-play, it’s gorgeous and it’s eons away from the same old thing.

As we’ve covered extensively, Forever Drive is about, um, driving forever. It’s an arcade-style driving game where your performance is ranked not on speed but on the points you pick up and the combos you build. It sports a comprehensive leveling system that earns you better, shinier and cooler cars as you progress, and a track editor that lets you help build the endless roads you’ll be riding on. And everything looks like it’s been ripped straight out of the best parts of Tron. Sounds great, no?

Loving Forever Drive means buying into its gameplay. A quick look at our forums suggests that some players aren’t really feeling the fun, and that’s fair. At its core, this game gets into a grind. Tracks can be quite samey as you drive through several end-to-end, and the only thing you’re racing against is time. But it keeps drawing me back in. I’m driven by the need to do better. 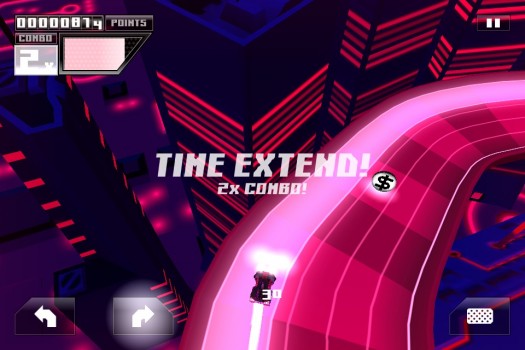 You see, you need a steady hand to do well in Forever Drive. You’re constantly on a timer, and tracks are covered in time-extending checkpoints. Each track you complete ratchets up your score, but it gets harder and harder to make it to the next checkpoint. If you want to keep going, you’ll need to hit every power-up on the field and dodge every car you pass. There’s a constant sense that if you can just do well enough, you’ll get to drive forever.

Dodging cars gives you another perk — each one you pass builds up your score modifier. You can also grab stars and ride the edges of the track (without crashing) for more points. At the end of your run your score is translated into experience and over time you level up, unlocking new cars, plates and paint jobs, and new scenery for track building. 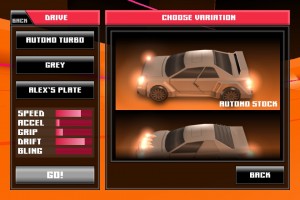 We have a full preview of the track editor written up if you want to get into the nitty-gritty. Suffice it to say that it’s extremely simple to use, but also powerful. I’ve started to see tracks come up that manage to be quite interesting and remain within its confines (tracks can’t cross themselves, and there’s a strict limit for how complex they can be). And you can vote tracks up or down on completing them, ensuring that dull or broken tracks won’t come up too often before they’re voted out of the game.

At this point, you’re probably waiting for the other shoe to drop, but it’s not going to happen. The pricing model is more than fair. You can purchase credits, and then spend them to earn experience (but not high scores) considerably faster. There are a few cars and cosmetic upgrades you can pay for. You’re also limited to creating a handful of tracks, but you can open up more save slots with in-app purchases. That last one is a bit of an odd choice for a game that so relies on community input. Otherwise, I’ve put hours into Forever Drive without spending a dime, and without feeling like I’m running up against any limitations. 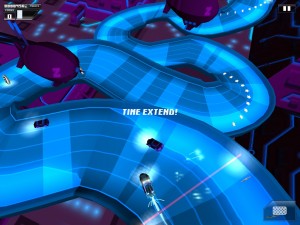 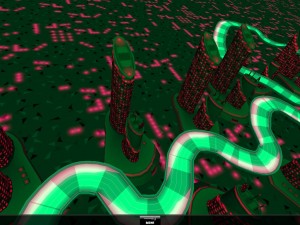 There are a few small issues, and hopefully Supermono will address them in updates. Buildings can be placed over tracks in the track editor, which has already become this game’s troll-of-choice. Eventually down-voting will remove them from play, but it’s sure annoying to have your screen constantly blocked in the meantime. You also can’t delete a track once you publish it, so that 3-track creation limit is a little too firm. Finally, the 10x experience multiplier for credit runs makes those runs feel so efficient that your experience seems to crawl the rest of the time.

The only issue I couldn’t get around was the controls. They come in four flavors — slider, joystick, tilt, or “arcade," which has directional buttons on both sides of the screen. On smaller devices these all work fine, but on iPad the only comfortable option is arcade steering. Unfortunately it puts the brake buttons uncomfortably far away. And no matter where you put your hands, the buttons for rating tracks are very distant. The interface needs adjustment if it’s to be played comfortably on iPad.

Even awkward controls didn’t stop me, though. The journey to driving forever is made all the better by striking visuals. Forever Drive has a neon and black color palette, and it makes heavy use of lighting effects, shaders and shadows. It’s a slick, stylized look that would be comfortable in the world of Tron. Put in your headphones while you play and you’ll also be treated to a great techno soundtrack. It’s the perfect combination for trancing out.

Forever Drive is a slick, mellow game that rewards both your time and your skill. It won’t appeal to everyone, but it can (and should) reach a larger audience than the average racing game. Supermono has done a fantastic job of creating something beautiful, interesting and free, so give it a test drive. There’s no obligation, and no money down.