So, we got a build of Forever Drive and decided to put the pedal on the floor in order to bring you some early impressions. And, wow, guys, does this seem cool.

With Forever Drive, Supermono Studios is taking a way smarter approach to user-created content design: instead of asking players to shape entire experiences, it asks that they mold a fraction of a blip of an infinitely expandable super-highway. By managing expectations before you even start creating, Supermono is freeing you from failure and the game’s players at wide from having to filter out tons of garbage. Most user-created content leaning titles, including Media Molecule’s venerable series, don’t enforce any kind of control or creative constraint, which makes Forever Drive unique, and as we’ve been discovering, pretty fun. 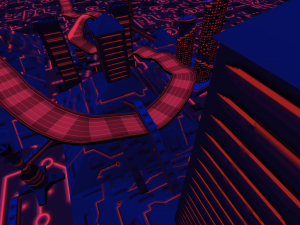 Forever Drive is built by you and everyone else. There are no curated races, no lifeless campaign, and no attempts at narrative. Supermono is shooting from the hip and guessing that its approach to user-content will be enough to keep everyone interested in the racing part, which by the way, is more about the journey instead of the destination or wins. It’s some next level stuff.

“What we’ve tried to create is a very streamlined experience — something a little different from the “load a track, do 3 laps, stop, repeat" gameplay that’s become almost universal in driving games,” Supermono’s Dave Ferner told us earlier this year.

“We’re trying to create something that feels more like an epic journey, with that feeling of discovery and wonder you get driving fast into an unfamiliar land…” 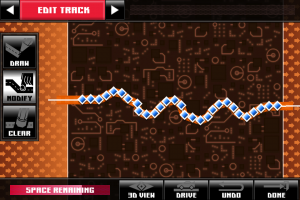 I recently gave the level editing portion of the title a go and I’ve been surprised by how deceptively simple it is and how graceful most of your projects end up being, even if you’re just goofing around and attempting to make something phallic. You’ll probably never make a level on par with 1-1, but you’ll make something that works and fits with the game.

Basically, there are two parts to the creation process: track editing and environmental editing. The former editor lets you build a small swathe of track from one end of the editor to the other, while the latter gives you the power to add scenery. Other tools give you the power to raise or lower the track where you please, as well as make fine adjustments on the turns you may or may not choose to have.

It’s not rocket science and I think that’s important: executing on the design concepts floating around in your head at any given time is about as hard as drawing your bedroom realistically from the mental picture you see when you close your eyes. By making the editor simple and keeping the bar low with the amount of content you’re responsible for, Supermono is constricting the scope of your ideas, but not their potential. 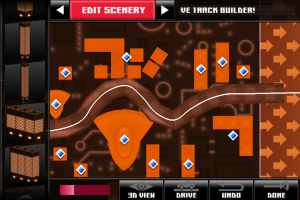 And while whatever you make will probably be gold, there are tricks to making a good track, as I’ve learned from Dave. He suggests paying attention to the actual curvature of tracks, how a straight benefits the overall design, other high-concept-y things. He also suggests checking out this article by Luke McMillan called A Rational Approach To Racing Game Track Design, which is crazy good read if you’re into design or production.

“One of the main barriers to mainstream acceptance of user-created tracks is the complexity of the editors — we didn’t want a PC style professional tool with a million hotkeys, we wanted a super-streamlined editor which was fun to use," Ferner tells us. “We honestly spent months on that thing — it takes a lot of work to make something simple out of something complicated!

“And because our game relies on users to create the content, we aimed to create an editor that was almost a mini-game in itself — there’s even some unlocks which you can only get by building popular tracks, and we may even put a highscore table for track creators… it’s all a big experiment, but hey, you never know until you’ve tried it!" 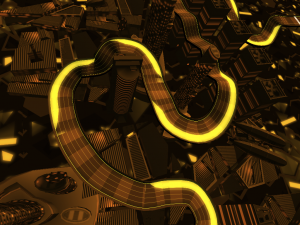 If a section of track somehow manages to suck, you’ll be able to down-vote it. After enough, it’ll be removed from the rotation.

The track I made while farting around (after the no-no shaped one, that is) was a simple “S”-shaped joint. The game automatically integrates in spots where players can drift to earn XP (which is currency used to purchase upgrades, cars, and more stuff for the editor) and it also auto-scaled the height in order to accommodate some lackluster building placement. The actual placement was a simple as dragging and dropping or pinching to zoom to smooth out the rough spots. You’ll see a few images of it if you look around this write-up.

We still haven’t seen the full-full game — you know, the one with the potentially hundreds of thousands of user-created sections of tracks, so we haven’t really dug into the core of the experience. We’ll definitely do that when the game goes wide later this October.

On that note, this is definitely a game that’ll live and die by its audience. It’s a title that will rely on a community and a vast one at that, so we’ll have to wait and see how people react to it when it hits and how long they’ll stick with the user-creation component in a post-release environment. Provided there is an audience, Forever Drive has the potential to fulfill the promise of its insane conceit, and really, we can’t wait to see if it can manage.