Starbase Orion [$4.99] is a space-based 4X strategy game from Chimera Software, the makers of Starbase Command [99c] . If you’re not familiar with the 4X genre, it stands for “explore, expand, exploit and exterminate." You navigate your space fleet around the galaxy (on a map) exploring various star-systems and colonizing planets. Your planets can be customized with buildings, farmers, scientists, and/or workers. You research new technologies, spy on other races, design new spacecraft, and engage in space combat. Phew! There’s plenty of stuff here for strategy gamers to totally geek-out on!

Two game modes are provided. There’s a single player mode against AI players, or asynchronous turn-based multiplayer modes (1 vs 1, 2 vs 2 team-play, or free-for-all). It uses the cool new iOS 5 Game Center features to manage the asynchronous play, letting you play against an online opponent, each taking turns at different times during the day (or night) without necessarily being online at the same time. The game will automatically quick-match you with an online opponent or you can invite a specific friend to a custom match. It also supports the new iCloud functionality, so you can switch your iOS device and keep playing from where you left off. Starbase Orion does run on iOS 4, but without multiplayer or iCloud support until you’re on iOS 5. 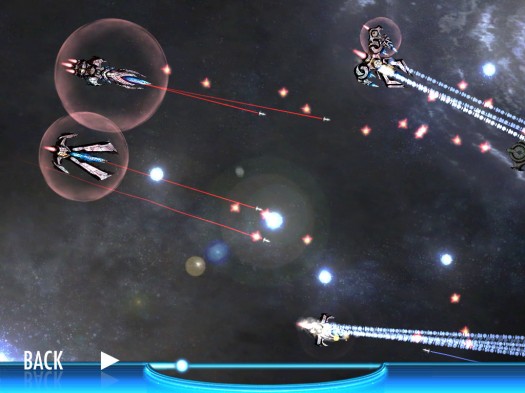 At the start of the game, you choose the size of the universe (small to huge),  the number of opponents (1-3) and the difficulty (easy to impossible), after which a random map of the galaxy is displayed. You can use your finger to pan around the galaxy, and then tap a star system to display its planets.

There are five predefined races available to play. The Isather are a tribal bunch who solve problems with brute force, the Cyban are robots with advanced researching abilities, Draske are winged serpents and skilled pilots, while the Vass are a shared-intelligence life-form which is dependent on its population size. The boring old human race are stereotyped as crafty smugglers. But if none of these races appeal, you can create your own custom race by selecting 10-points worth of racial attributes from a list. Your choice of race shapes your strengths and strategies.

You’re given a small space fleet initially, although the vessels are different each time. There’s a range of vessels like cruisers, frigates, and destroyers. There’s also a ship designer, which let’s you add weapons systems and ship systems (eg: fuel reserves) into slots on a few base models of ship. The number of slots varies depending on the base ship model. Or, if you need money, you can always scrap a ship for galactic credits. 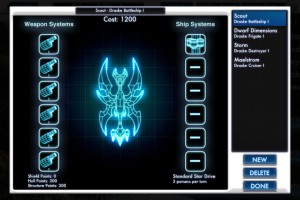 To explore the galaxy, you tap on your fleet, then select specific vessels, before tapping on the destination star system. You might send a scout ahead to determine if any planets are viable for colonization, since they have more fuel. If something’s suitable, you can send a colony ship to claim the planet and expand your empire. There’s no story-line or missions to direct you, it’s more like a sandbox game, where you choose what to do next.  If you research fuel technology or add fuel tanks, you can explore further afield.

Once you’ve colonized a planet, you can tap it to access its information and determine how to exploit it. Some planets are suitable for colonizing, some for mining, while others are inhabitable. The game shows a picture of the planet’s surface and plays some environmental sound effects, like wild-life or wind, depending on the habitat. Each planet has a certain number of land plots depending on its size, where you can construct buildings like a marine barracks to create defensive ground troops and transports. You allocate the population of the planet to specific roles, including: farming (food), workers (buildings and ships) or science (technology), and they’ll pay you taxes. 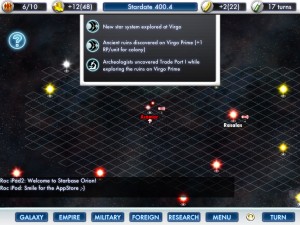 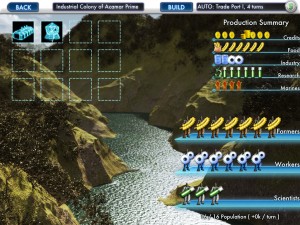 While exploring, you might make contact with other races and engage in some space combat. When a conflict situation arises, you issue the orders to your fleet, controlling the ships movement, formation, targeting or evasion. The targeting orders include attacking the closest, weakest, smallest or largest enemy ship. Orders are applied to one ship, a class of ships, or to the entire fleet. Once your orders are issued, the combat doesn’t commence until you end your current turn.

During combat, you don’t actually control the ships, but you watch them move and shoot at each other based on your earlier orders. You can tap a ship to see information about it, choose the playback speed or use a slider to move to any part of the battle you want to watch. Combat can span a number of turns and continues until all enemies are destroyed. Watching combat sounds boring, but it’s actually interesting to watch the battles unfold and to see how they follow your instructions. 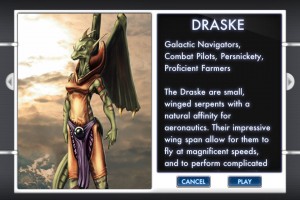 Since larger battles span multiple turns, you can adjust your orders during the battle, if you choose. You can also send in reinforcements, and if you’ve got a ally (2v2 multiplayer mode) they can come to your assistance, as space battles are not restricted to two empires. Combat is not your only option for foreign relations, as you can build an agent training camp to produce spies. Your agents can sabotage other empires or use espionage to steal their technology.

Also, you can research to improve your own race’s technology. A list of astrophysics, military, and civil projects are proposed, but it’s your decision which proposals are funded. You might study weapons, a star-base, or perhaps a hydroponics center as you progress through the technology tree. If a proposed research project is unfunded, it turns yellow, then red in the list, before eventually expiring and being replaced by new research proposals. If you build a research center and add scientists, your research occurs faster.

Once you’ve determined your various strategies, you tap the ‘turn’ button to action your commands. Instead of each player taking turns in sequence, the time speeds up and it’s only your turn again when an event occurs in your empire, such as research or a new building being completed, a ship reaching it’s destination or your population starving to death because you thought robots didn’t need food! This means the seemingly daunting 18-turns required to research hydroponics might actually occur within a couple of presses of the turn button. In single player mode you can exit this “turn compression" whenever you want, to issue new instructions sooner.

Like many strategy games, Starbase Orion has an initial learning curve. There’s help pages for the screens, which are helpful, but they don’t explain everything. I had trouble deleting programmed vessel movements and also discovered a worm-hole but had no idea how to view or use it, as it didn’t show up anywhere (apparently you can enter it). The developer is already extending the in-game help and writing a players guide, plus our useful discussion thread answers questions and includes video footage and a tutorial which is recommended viewing for new players.

When selecting a huge universe with 3 enemies and impossible difficulty, the turns were significantly slower, taking over a minute rather than seconds on an iPad 1, although most players would probably be selecting a smaller, less complicated galaxy which is far more responsive. And if you’re playing asynchronous multiplayer, the impact of these delays would be less noticeable.

Starbase Orion has an “epic-feeling" as you strive to expand your empire across the galaxy. There’s several facets to this game, as described above, but the interface pulls it all together nicely, so everything is easy to find. Once the help screens are expanded and a user guide produced, this will be a solid game from Chimera Software. However, the true measure of this new game’s success won’t be known until more people have had time to play the multiplayer modes.