Yesterday, TouchArcade attended EA’s Naughty or Nice game event in New York and spent time with a number of just-announced titles on the way from Chillingo. Perhaps the most stand-0ut game of the lot is Zombie Wonderland 2, sequel to the June 2010 release Zombie Wonderland [App Store]. As in the original, the upcoming sequel puts you in the shoes of Chuck, the renowned Zombie Cleaner of the pleasant little ’50s Americana town, Niceville. While, before, your task was to keep the homes of your clients as clean and as zombie-free as possible, your new order of business is a bit more complex a proposition. 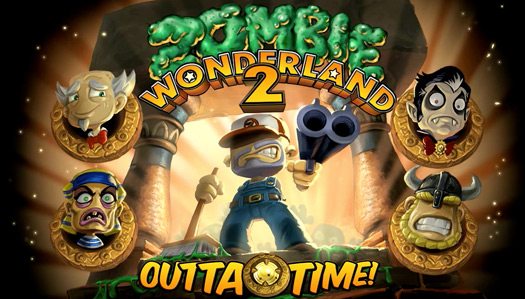 Now, while we aren’t allowed to get into to many details as far as the storyline goes, just yet, I can tell you that the rooms you will be defending (and cleaning) are, this time around, spread throughout time. From the local museum, which serves as a kind of time-hub, you will be traveling to medieval castles, ancient Egyptian crypts, Viking halls, and ancient Japanese dwellings — all riddled with zombies that make terrible stains when dispatched.

Some of the tasks that must be completed involve several stages set in different locations and / or times. For instance, one of your clients, Vlad the vampire, has given up drinking blood and moved over to milk. So you must travel through time to get him a glass of milk by milking a cow in a zombie-swarmed barn. Each of the temporally far-flung locales features its own mini-boss that appears and drives the zombies into attack frenzies that make the task of keeping the rooms clean and zombie-free quite a challenge.

While the original release featured four locations, four weapons, and five types of zombies, Zombie Wonderland 2 delivers 25 locations, 25 weapons, and 22 types of zombies, as well as a mega-boss zombie. Some of the weapons available are special bullets, medusa bullets, gnawers, turrets, lightning bottles, killer grass, the brain toy — even a Roomba(-like robotic vacuum). Weapons can be damaged by zombies, but can also be repaired. New weapons can be quickly bought via in-app purchases or unlocked through dedicated gameplay.

Some areas of the town’s museum are visibly under construction, and serve as placeholders for additional areas that will arrive in updates, down the road.

We’ll take a closer look at Zombie Wonderland 2 when it arrives sometime before Christmas, but, however we rate it, it’s sure to is sure to take the crown as far as number of genres represented. This survival cleaning, time management, tower defense zombie shooter will be priced at $0.99.