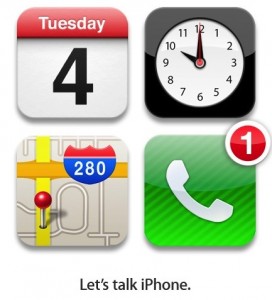 While Apple keynotes themselves are always a lot of fun, I actually almost like the day immediately before the keynote more. Speculation on what’s coming reaches a climax, and all you’ve got to do is wait a day to see who was right and who was wrong. MacRumors provides a rundown of possibilities from the hardware lineup, and subsequent rumors make an iPhone 4S seem even more reasonable as more and more vague leaks of “iPhone 4S" branding appear. Following case leaks and a few other shaky rumors, there hasn’t been a very strong indication that the redesigned iPhone 5 is coming at all– At least not yet.

Regardless of what the new iPhone looks like, the addition of the A5 processor should make the iPhone 5 (or 4S) a pocket-sized power-house. Anandtech recently posted a set of benchmarks of mobile GPU’s, and the GPU in the iPad 2 is still blowing the doors off the competition: 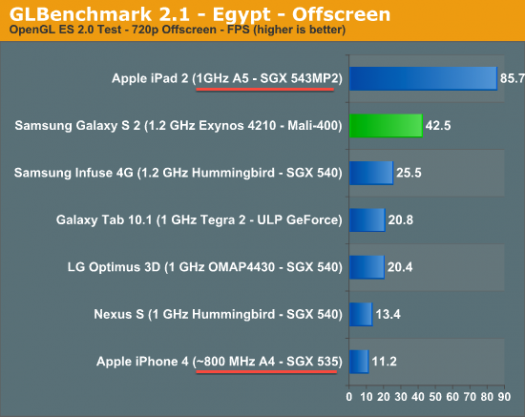 The rumor mill seems to be in agreement that the “main" feature to be touted at this keynote will be an entire new voice-powered “Assistant." Check out a demo video that MacRumors compiled based on rumors of how it will work:

9to5Mac has an interview with the co-founder of Siri, the company who is believed to be behind this new technology, who has the following to say:

Make no mistake: Apple’s ‘mainstreaming’ Artificial Intelligence in the form of a Virtual Personal Assistant is a groundbreaking event. I’d go so far as to say it is a World-Changing event. Right now a few people dabble in partial AI enabled apps like Google Voice Actions, Vlingo or Nuance Go. Siri was many iterations ahead of these technologies, or at least it was two years ago. This is REAL AI with REAL market use. If the rumors are true, Apple will enable millions upon millions of people to interact with machines with natural language. The PAL will get things done and this is only the tip of the iceberg. We’re talking another technology revolution. A new computing paradigm shift.

So here comes the fun part, what do you think is going to come of tomorrow’s keynote? A spec-bumped iPhone 4S? A surprise reveal of an entirely new iPhone 5? New iOS 5 features that haven’t been revealed yet like Assistant? New iPod touches to coincide with the iPhone launch? Or will something come out of left field like the iPad 3 with Retina Display, or a million other things that could potentially happen that Apple managed to keep a total secret?

Personally, I think the iPhone 4S is happening but I just can’t shake the thoughts of the potential redesign. I’m not sure how credible the weird case “leaks" we’ve seen are, but the rumored redesign appearing in an Apple app I just can’t rationalize in any way other than a design like that is coming. What reason could Apple, a company who historically has put immense importance on a refined user experience place that icon in their own apps? It just doesn’t make sense!

I guess we’ll find out tomorrow, but, in the time being, we can let our speculation run wild– At least for another 24 hours or so.