I want to love Madfinger’s Shadowgun [$7.99]. I really do. It’s a lovely looking game, one of the best on iOS, but it’s so riddled with holes, crashes, bugs and repetition, it’s easier to walk away frustrated than in awe of it.

You play John Slade, a brute with a gun hired to bring back a mad scientist. There’s a whole back-story about how corporations rule the world and whatnot, but none of that makes a difference to the core of the game. It’s basically you and your A.I. making bad jokes at each other while a mad scientist is on the loose causing havoc.

Shadowgun is a looker in all respects and running it on both an iPhone 3GS and an iPad produces amazing results (although, text is incredibly blurry on the 3GS). If you look closely, you can see some of the tricks Madfinger used to make it run and look the way it does, but as far as the environments go, it’s hard not to sit with your mouth agape in awe. 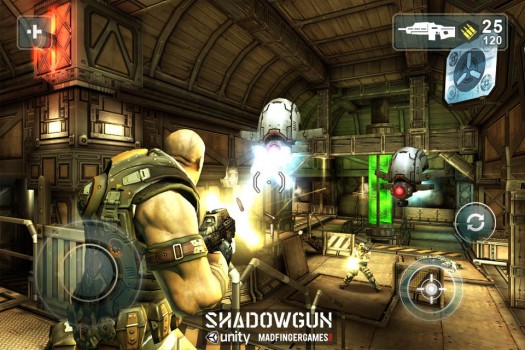 There has been a lot of speculation that this is a Gears of War clone, but it’s not as blatant as it appears. Yes, it’s a cover-based shooter with enemies that appear to dig bondage, but the comparisons pretty much stop there. The guns aren’t as fun to play with as Gears and the lack of any squad mechanic ensures Shadowgun won’t be confused as a Gears clone by anyone who’s actually played it. The weapon variety is stagnant, all feeling relatively similar and none of them standing out from the usual suspects in action games — shotgun, SMG, rocket launcher, grenade launcher — you get the point.

For movement, the controls work well and cover is handled automatically when you get near a wall. However, I was either running into a bug or an odd feature on both devices that would lock my gun in place while shooting a little over half the time. It was never consistent when it would decide to do this, and was amazingly frustrating during portions of the game that had enemies who actually moved. Maybe it’s supposed to be like this, but if it is, it doesn’t work well. 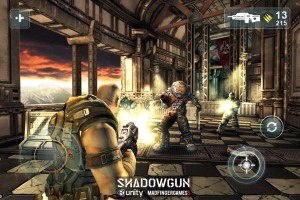 It’s a good thing the enemies don’t move much. Most of them will be content appearing on screen, running to cover, then popping up to shoot at you. There are a few different types of enemies who don’t do this, but their movement is mechanical and predictable throughout. They’re not stupid so much as programed to only follow a set path, regardless of where you are or what you’re doing.

Then there are the crashes. So many crashes. In around four hours, the game had crashed around twenty times on my iPhone 3GS, then, after the third hard-reset, it decided to delete my save game on the second to last level. Full disclaimer: I didn’t bother going back to it at this point.

I’ve learned to deal with a lot of technical issues with games in the past, but the one I have no tolerance for is a deleted save game. It’s the gaming equivalent of blacking out at party and finding pictures of yourself making out with a goat in the morning. It’s heart breaking, frustrating and there’s nothing you can do about it.

Maybe if Shadowgun was a little more diverse I would be interested in pushing through it again, but the bulk of the game follows the same formula on repeat: walk into area, trigger event, enemies rush out, hide behind cover, shoot. There are enemies later on with different attack-styles, but most of your time will be spent in long corridors with unexplainable cover, shooting at grunts.

All of that said, there are a few interesting mix-ups throughout the campaign worth noting. Boss fights, for example, are well thought out and shift from combat to minor puzzle solving. There are also Simon style hacking mini-games spread throughout to mix things up, as well as light environmental puzzles here and there. They work as a nice respite from the game’s shooting heavy tone, but are never challenging enough to offer more than a quick stop-gap in the action.

I have a whole list of pet peeves Shadowgun manages to break – poorly chosen checkpoints, unpredictable splash damage, and the bizarre choice of chapter ends – all things that will frustrate some more than others.

If Madfinger can fix the crashing and save-game deletion issues with a patch, they’re still left with a repetitive, but lovely looking shooter. There are hints of true quality in the boss fights and some minor sections of the campaign, but the majority relies on a simple, corridor design that’s hard to find engaging for very long.