Big Blue Bubble’s Fling a Thing [99¢] is one of those simplistic games with an almost indescribable appeal. Its core mechanic is so refined and entertaining and its constituent parts exist in such a strong harmony that you can’t escape re-visiting it. Fling a Thing is great because of the sum of its parts – the sound direction, the presentation, the action, and even the level progression system live to serve each other and it makes for a good time over and over again.

Fling a Thing is what happens when a studio takes the Doodle Jump formula and gives it structure, and then swaps the alien for an insect that has a suction-cup for a mouth. In the game, you control a sticky-mouthed “Thing" that adheres to glass panes. By grabbing its tail, you gain the power to fling the Thing in an arc. Sometimes you’ll need to attach to other bits of glass, but more often you’ll be flinging to bubbles, which act as a puzzle device. 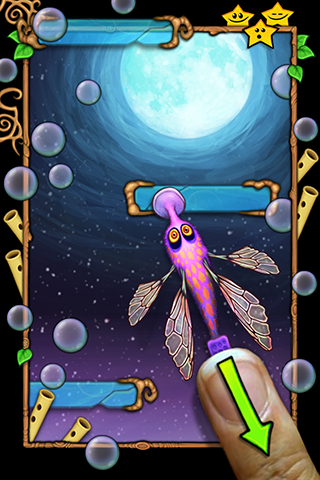 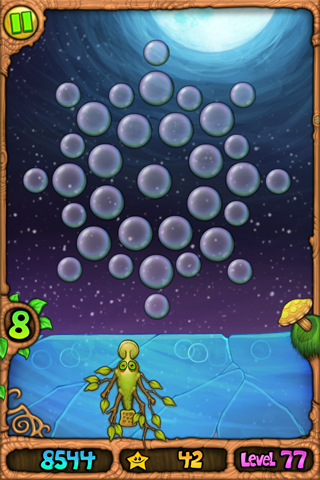 What makes this mechanic pop is the approach to the puzzle design. Bubble puzzles are all free-form and not available in bits and bobs of UI. The number of “flings” you get at the start of the experience is all you’ll get until you’re out. As you progress, you’ll get shots at earning more flings via power-ups, but not enough to entitle you to horse around.

In a larger sense, Fling a Thing is a game about attrition and patience, and that’s a smart way to design a puzzle-light experience. You could go ballistic and waste flings on clearing four bubbles, but wouldn’t it be better to wait to fling until they line up, the game asks? You never know how much further up you could go, it teases.

Sometimes its fun to be a game manager as well an active participant. If you want to be critical and reserve what you can, you’ll be rewarded. If you want to just fling around, there’s simple entertainment to be with that, too. Big Blue Bubble nails the two approaches and seamlessly integrates them together.

The progression components back up the idea of infinite-ish play, as the game offers up various unlockables including different Things to play with, different level themes, and modifiers for the power-ups you’ll encounter in exchange for stars, which are the game’s currency. You can buy stars for a real-world price or gather them as they spawn randomly. You’ll need a lot to purchase stuff, so be prepared.

All the pieces of Fling a Thing fit together well. The fling mechanic and your strange avatar are held up by the otherworldly look of the visual direction while also propping up the bubble puzzle mechanics, and the design direction is bolstered by a rich progression system that keeps rewards coming with continued effort. One issue really sticks for me: it’s hard to fire your Thing with any sort of accuracy when its lands in a corner.

The mark of a strong mobile game is often how much you go back to it and everything in Fling a Thing beckons more play. Fling a Thing is a sharply put together a package, assembled with a care to simple refinement that we often see in the indie space. Give it a spin if you need something fast and fun. You’ll dig it.

UPDATE: We’ve been informed that the ads, which we originally criticized, were a mistake. They are being removed.