Back in the depths of 2008, we had our hearts broken by I Love Katamari. The controls were problematic, there were performance issues, it was Katamari, but it was a mess. Now Namco is taking another shot at winning our love with Katamari Amore [Free].

Full disclosure: I’m a Katamari fan from way back. I got in on the ground floor with Katamari Damacy on PS2 and I’ve played every console release since. Over the years the formula has become a little stale, the craziness has started to feel a little forced, but I’m still a person who loves to roll things up. Sushi, cats, Ultraman, I’m not picky. So it’s with a heavy heart that I tell you that Katamari Amore is a loveless thing. 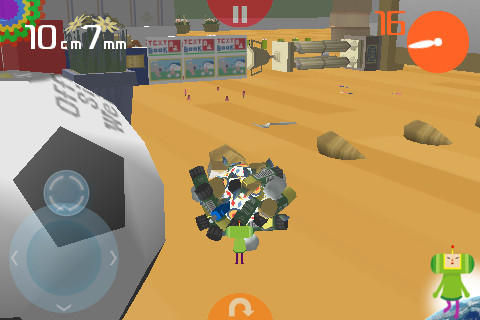 Yes, yes, it’s Katamari! On iOS! But that’s not enough. The framerate gets choppy at times, especially on my 3GS. The controls are improved over the last outing, now offering one virtual pad, two virtual pads or tilt. The two-stick method is essentially the same as the console controls, if a bit stiff. The method for switching controls is awkward and confusing, but whatever. Technically this game is pretty much fine. It’s just completely and utterly joyless.

The level design is the worst offender. One of the joys of the Katamari series is exploration. Strange scenarios can be found if you pay attention. You might find bears corralling humans at a campfire, or a hidden shrine to sashimi. It doesn’t often make sense, but it rewards curiosity. In Katamari Amore, you’ll find whatever random items are needed to make you bigger, strewn appropriately to allow you to progress. The most interesting thing I found in my travels was a space dog with an astronaut, and I guess the game thought it was interesting too because I got an achievement for rolling it up. 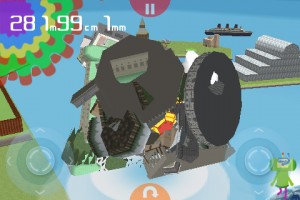 And that’s emblematic of the whole problem with Katamari Amore. Nothing is there just for fun. To clear most of the Story Mode levels you’ll need to roll up nearly every item available. This turns the game from a frantic size race to a tedious exercise in hunting down the one item you need to get just big enough to get the next batch of items. It’s a bare-minimum philosophy that permeates everything — the King of All Cosmos’s dialogue, the levels, the items and the entertainment value.

We mentioned that this game would have a special Pac-Man themed level, and it does. But don’t get too excited. It’s basically one level of the classic game, but with terrible controls and an obnoxious camera angle. There are better ways to play Pac-Man.

If none of this concerns you and you just want to get your Katamari on, here’s what you need to know. The game is free to download, and contains one level of Time Attack mode. With an in-app purchase of $3.99, you can unlock all six currently available levels. Each has a Story Mode (in which the King asks you to roll up a specific item that always happens to be the largest item in the level), time attack, an exact size challenge and eternal mode. There are more packs on their way, but there’s a reasonable amount of content here to start with.

It’s not that Katamari Amore is completely terrible. There are a few technical speedbumps, but it’s competent on the whole. Some of our forum users have decried the graphics, but simple art is a series staple. And it’s a functional game, with plenty to do. It’s just that it could be so much more.

Most of the things Namco has left out aren’t the things that would push the limits of the platform – they’re the humor and the spirit of the series. iOS games can be made with love and joy, they can be funny and charming. Those are things the Katamari series has had in spades, and it’s a shame they’re missing here.