Metro Games’ Pixel Ranger [$.99] is a deliciously offbeat vertical shooter that executes on its old-school SCUMM-like art direction and its jokey It Came From Outer Space vibe well, but it’s an otherwise forgettable game on a mechanical level. A crippling jump mechanic that feels out of place, a horrific control scheme, and poor checkpointing hamstring the action and combine for a storm of constant frustration. Pixel Ranger looks good, is hilarious when it intends to be, and it has a lot of potential, but it falls flat in the face of its issues. 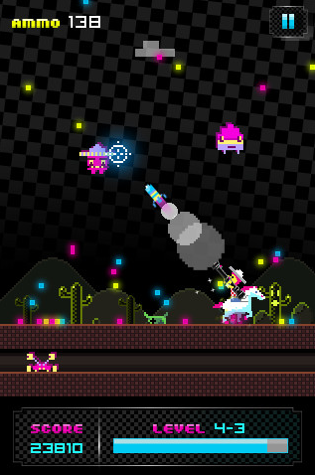 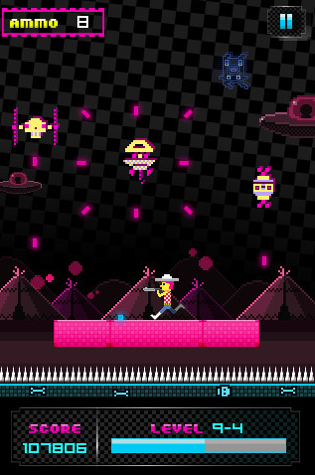 Bullets pass through enemies and ammunition counts stack from level to level, which puts the emphasis of the action on multi-kills. Pixel Ranger does a good job incentivizing the multi-kills specifically with rewards, but power-ups in particular provide the heaviest relief and the most tactical opportunities. They’re pretty powerful in general — a great touch.

The balance being struck between the ammunition and kill count goes haywire when you’re asked to start running around and handling ground-based opponents. Basic side-to-side movement is tilt-based while shooting and jumping are handled with touches to the screen. When the action gets hot, you’ll need to jump, tilt, and shoot at the same time, meaning you need Twister two fingers on the screen and tilt your phone to and fro simultaneously. It’s hard to do with any sort of panache and often impossible depending on where you are when ground enemies emerge.

Jumping in particular just feels like an afterthought. It doesn’t jive with the core action, and in the worst cases, just gets in the way of it. When you have to stop and consider jumps over environmental or enemy obstacles, you take your eyes off of the prize.

The lack of checkpointing stacks on the finger frustration. If Pixel Ranger wants to punish you for not having the finger dexterity and muscle memory of a Rubik’s Cube enthusiast, fine, but the price of not being god-like is a total restart of an entire chapter. The pixel count you have in a previous level carries over to the next, so it’s easy to see why you can’t just “reload” a level, but this fact doesn’t negate the pain of having to start over.

The glaringly awesome part of Pixel Ranger, which at times override whatever bitterness I feel when I think about the game as a whole, is its art and sound direction. It reminds me of zoomed out Version 1 Maniac Mansion. The cowboy avatar has that blockiness and feature set of Mansion’s characters and the color selection utilized in the intro scene had me re-calling some weird, totally unrelated experiences. The cutesy “aliens stole my lady and I’m also a cowboy” contrivance somehow works and brings a flavor that informs everything in the title thematically well, including even the (hilarious) power-ups.

Excluding the wonky jumping mechanic, I like all of the ideas in Pixel Ranger. Its look and style, its enemies, its attrition-based vertical shooting, and its power-ups are strong parts of a whole that, unfortunately, doesn’t feel cohesive. This is the kind of game that sort of flat-lines itself over the haul and that’s unfortunate. Granted, it’s not terrible, but it’s not a great game, either. We suggest that if you’re into its style and methodology, to go ahead and give it a try, but just be wary that it has its share of faults.