Cowboy Guns [$0.99 / Lite / HD / HD Lite] is probably the most generic name for a game that I’ve heard in a while. Thankfully, that faux pas is one of the worst that Chillingo’s latest offering commits. Sure, Cowboy Guns isn’t going to win any awards for innovative gameplay, and the general lack of variety accompanied by an uneven difficulty is somewhat annoying. However, Cowboy Guns does succeed at creating a decent dual-stick shooter supported by a single player story that takes you through the harsh domain of the Wild West.

Gameplay-wise, Cowboy Guns is a classic dual-stick shooter similar to Minigore. In fact, the visuals sort of have a Minigore motif as well, although the muted graphics of Cowboy Guns are not as detailed, regardless of whether you opt for the retina “HD” version or not. The main adventure mode in Cowboy Guns has you playing as “The Kid,” a former gang member turned law man that must take down his former posse when they threaten his town. Okay, the story isn’t going to turn any heads, but it’s nice to see a dual-stick shooter actually try and incorporate a full-fledged story into the game instead of the usual generic prompt accompanied by hours of mindless killing. If a cheesy narrative-based game mode isn’t for you, Cowboy Guns also has a quickplay mode that operates more like the traditional games you find in this genre (although you need to play through at least some of the adventure mode before you can unlock quick play). 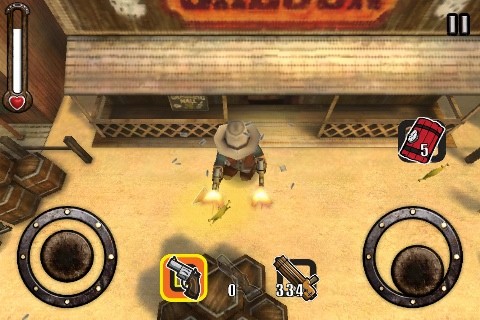 Cowboy Guns also differentiates from most other dual-stick shooters in its pacing. There’s still a lot of shooting and killing, but the use of weapons with limited ammo as well as a reload mechanic means that you aren’t going to be killing all the time. In fact, as you get further into the game, you’re going to have to carefully plan your reloads and weapon selection carefully, as you can easily be taken down as you’re waiting for your gun to cool down or reload. There’s also a lot more exploring in Cowboy Guns, since in addition to having to visit countless locations to advance the story, there’s also a star collecting side quest that’s going to have you scour the corners of each map (the more stars collect, the more you can upgrade your weapons/armor which makes them very important).

Where Cowboy Guns starts to falter is in its lack of variety both in weapons and in enemies. There are only four different weapons that can be used, and while you can upgrade each one several times, all that really does is increase the damage and not much else. In addition, there are only three or four different enemy types that are introduced early on in the game and are constantly reused (with stat increases as the game progresses). Even the music started feeling reused and actually got somewhat annoying to me as I got further into the game.

I also wasn’t a fan of the difficulty curve.  Upgrades become essential in order to keep on par with the upgraded enemies, but you don’t ever seem to earn enough money to buy them all. Also, since collecting stars opens up the upgrades, folks that aren’t into the exploration/collection mechanic will be at a severe disadvantage later on. None of these issues are hardly game-breaking, but it just seems as if the developers didn’t take into account that Cowboy Guns is actually a bit longer than most dual-stick shooters and the adventure mode creates a higher expectation for content.

Regardless, Cowboy Guns does manage to succeed in its core gameplay mechanics. If you’re a fan of dual-stick shooters and you’re looking for something new to play, Cowboy Guns is certainly worth a try. However, newcomers to the genre or folks that can’t stand cheesy Western stories may not get as much satisfaction out of it.