About a year ago, Hypership Out of Control [$0.99]made its debut on Xbox Live Indie Games, better known as that place where good games go to die. Thankfully it’s come to a platform where it might get a bit more attention, as it should. It’s crazy fun.

Here’s the score: you pilot a spaceship that’s lost its brakes. The accelerator is floored. Your ship is speeding out of control and it’s up to you to keep it from crashing. Don’t even think about blinking until you’ve made it through safely.

Hypership Out of Control doesn’t stray far from the archetypal vertical shooter. The ship flies and shoots ever upward while obstacles pass around it. Relative touch controls are the order of the day – that is, the ship echoes the movements of your finger, no matter where you touch the screen. They’re precise and effective, which is for the best. Where this game diverges from the norm is in speed, and a lot of it. 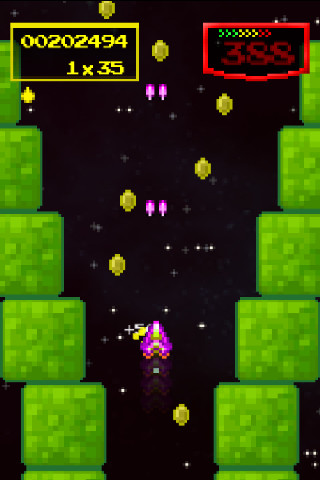 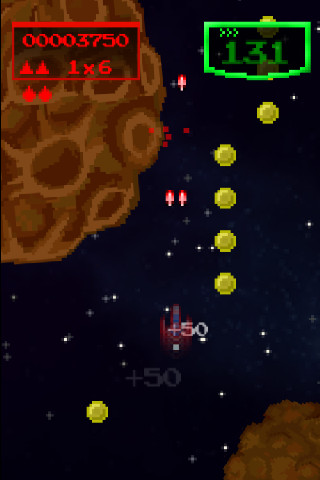 As you fly, your ship moves faster and faster. There’s a cap you can hit, but that maximum increases with every wave you survive. For ten waves you’ll need to dodge obstacles, collect powerups (some of which slow you down, and others speed you up) and shoot foes out of the sky. All while going faster and faster, and all without a single break in the action.

You have three lives and a small collection of bombs to get you through. Should you manage to survive all ten waves you can do it again and try to improve your placement on the Game Center leaderboard (and snag an achievement or two in the process). Coins are both multiplier and score, so top players will need to learn how to collect ’em all. You can also hit up any of the three other game modes.

Hardcore is the most intense of the four. It gives you just one life to survive all ten waves. Coindown turns coins into fuel — you burn them constantly, and you’re toast if you run out. Superspeed is probably self explanatory: this one lets you break the max speed barrier and fly at insane speeds.

No matter which mode you play, the game is always essentially the same. The waves aren’t random, so memorizing the best way to progress is definitely helpful. If, however, this starts to get a little old, there is one way to mix things up: you can reverse the waves in any mode. This lets you play each wave from end to beginning, and it has its own set of leaderboards. This may not be quite enough variety, but there is a lot of fun to be had before flying the same route gets dull.

If you’re looking for a new set of leaderboards on which to prove your worth, Hypership Out of Control will give you a great time while you’re working on it. The whole game is lovingly infused with retro style, from its pixel art to its music and sound, and that aesthetic carries over to the gameplay. Even on normal mode, this game is hardcore. So give it a shot, and drop by our discussion thread to let us know what you think.