If you’re a regular listener of our TouchArcade Show podcast (and if you’re not, then really, shame on you) then you are most likely familiar with my Kitty Korner segment, where I break down games that can be either bad or good but will always at least feature a feline of some kind. This is my promise to you, the listener. During our episode 12 podcast last month, my kitty game du jour was a fun physics arcade game called Sushi Cat [99¢].

In Sushi Cat, the goal is to drop your kitty from the top of the screen and bounce him down through the level in a Peggle-esque fashion, collecting sushi along the way and eventually ending up in a bin at the bottom of the screen. As kitty eats sushi he grows fatter and squishier, which can make for an interesting trip through the many objects that make up a level. I really ended up digging Sushi Cat much more beyond the initial “it’s a cat game” infatuation. The gameplay is surprisingly fun, and I especially love the entire aesthetic and the humorous animated cut scenes that tell the story of Sushi Cat’s plight.

Today, I learned that a full blown sequel to Sushi Cat was released at the beginning of this year, and is available on the Armor Games website. I spent some time with it and it appears to include everything that made the original so great plus some added new features. First, there are new story cutscenes and levels to play through, as well as a new antagonist named Bacon Dog. Perhaps best of all there are now unlockable costumes for Sushi Cat, so you can adorn your fat furry critter in pirate gear and more should you feel the need (I felt the need). 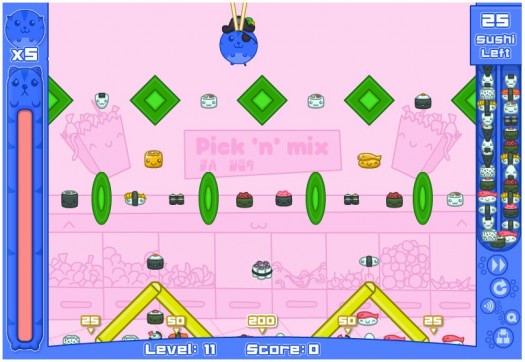 Sushi Cat 2 grabbed me from beginning to end just like the original, but sadly, I can’t find any sort of information that it’s going to make its way to iOS anytime soon. Too bad, really, because if only Armor Games knew that if they brought Sushi Cat 2 to the App Store then I’d pimp it on Kitty Korner and it would literally fly off the shelves. Not literally, though, it’s digital. But we have heard other developer success stories of increased sales following an appearance on Jared’s Kitty Korner, sometimes in the several thousand percent range. How a company, who has millions of unique players across their impressive suite of free online games, could possibly turn down such a tantalizing prospect is beyond me.

For now I can just dream that we see Sushi Cat 2 on iOS someday. In the meantime, you should definitely check out the original Sushi Cat if you enjoy lighthearted physics puzzlers with a great sense of style. You can play the Flash version of Sushi Cat and its expansion The Honeymoon – both of which are included in the iOS game – for free on the Armor Games website if you want to try before you buy.