It takes a special kind of game to pull off surviving exclusively through tilt controls. That goes double for games that attempt to do it and are only available on the iPad. Sure, the iPad’s accelerometer has got to be used for something, but some folks (and rightfully so) find the idea of having to tilt your tablet every which way just to play a game to be a bit daunting. Pod Odyssey [$2.99] is the latest attempt at a tilt-controlled iPad exclusive. While its controls aren’t perfect, there’s certainly enough here for an enjoyable experience with some caveats.

Pod Odyssey isn’t a game with a particularly engrossing story. In fact, all you know is that you’re piloting a ship (that looks strangely like a squid) that is exploring various alien planets in labyrinth-like levels. The game gives off an abstract Lunar Lander sort of vibe. Each level has a primary and secondary objective, and your goal is to successfully complete both without dying (i.e. running out of energy for your ship). Standing in your way is a variety of structures that shoot projectiles at your ship. Those projectiles are anything from dumb missiles to land (space?) mines to heat seeking bombs that attempt to follow you. 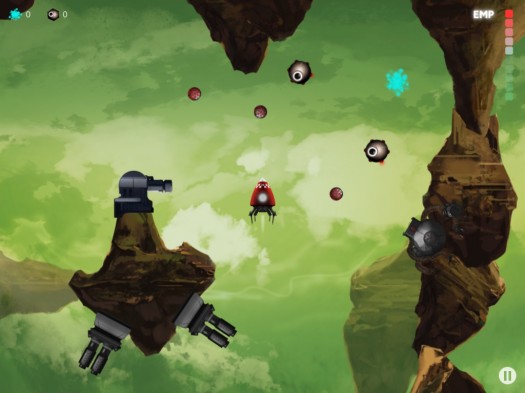 According to Pod Odyssey’s iTunes description, its controls are so easy “a six-year old can play.” Assumedly, that depiction is referring to the game’s accelerometer based controls. Controlling your space pod is as easy as tilting left or right for directional controls, while tilting forward and back raise and lower the pod’s altitude. In addition to movement controls, you can tap the left side of the screen to raise a damage shield, while hitting the right side of the screen launches an EMP which slows down obstacles. Overall, the accelerometer controls are well done and offer enough precision in order to navigate through the smallest of passages with a steady hand.

My only lasting gripe about Pod Odyssey’s controls is the fact that you will need to continually calibrate your game whenever you shift into a different position while playing. This isn’t a problem solely with Pod Odyssey – this issue exists with most games that require precise accelerometer controls. Still, it would have been nice to have some sort of alternative control scheme in case you didn’t feel like tilting your iPad in order to play. However, once you do get the controls calibrated, Pod Odyssey becomes pretty easy to navigate. 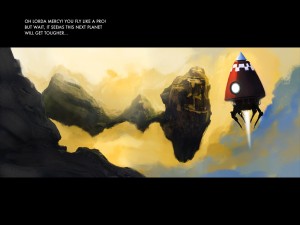 It’s a good thing Pod Odyssey’s controls are well done, because you’re going to need every bit of skill in order to successfully complete every mission and secondary objective. I thought Pod Odyssey did a great job balancing its difficulty curve. The first third of the missions are spent introducing the various enemies and tools available for use, while the rest of them slowly ramp up both the general difficulty of each level as well as the secondary objectives. The last third of Pod Odyssey definitely turns up the difficulty and requires many runs in order to fully complete each level. However, I was never overtly frustrated with the difficulty – an important point for games such as this.

My most favorite thing about Pod Odyssey is its overall presentation. Both the music and graphics do a great job adding to the ambience and creating a feeling that you really are lost on a distance planet.  It combines that sort of surreal feeling you get when you’re playing a game with no real objectives, but then manages to successfully incorporate action sequences and goals on top of it.

Despite its strengths, I think Pod Odyssey does suffer from a lack of variety in both level design and enemies. As the levels progress and get harder, you aren’t really introduced to new challenges. Rather, you get the same obstacles thrown at you, but in greater quantity. Sure, the difficulty is there, but it can definitely become bland towards the end. Also, Pod Odyssey only features 27 levels, which means that even if you don’t mind some monotony, your experience isn’t going to last very long.

Regardless of these gripes, Pod Odyssey is a solid arcade-style maze crawler that gets a lot of the basics correct. If you’re looking for a challenging (but short) game to test your precise reflexes, and you don’t mind putting the accelerometer in your iPad to good use, give Pod Odyssey a try.