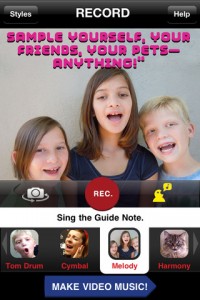 Musical game-like apps have had a great life on the App Store. Smule seemingly launched the genre of musical toys with Ocarina [99¢] (if my memory serves me correctly) and later expanded out to fully licensed titles like Glee Karaoke [99¢] and I Am T-Pain [99¢]. Songify [Free] was one of the next major musical crazes to hit, which made the auto tuning process found in I Am T-Pain even easier. Tonight, Harmonix, creators of Dance Central and Rock Band up the ante even further with VidRhythm [$1.99].

In VidRhythm, you can quickly and easily create video remixes of a series of videos you shoot to have a product that’s vaguely similar to some of the incredibly in-depth video remixes found on YouTube. The process couldn’t be more simple. You shoot a small handful of clips, the app suggests what you should try to make one sound like, and then it auto-magically makes a video like this:

There’s a number of different themes you can use, and exporting then uploading the videos to YouTube, Facebook, and/or your camera roll couldn’t be simpler. I’m amazed at both how easy this whole thing is and how well it works. I mean really, it can take the weird sounds my dog makes and turn it into a coherent musical video. That’s pretty awesome. I can only imagine what people will start creating once people with actual musical talent grab hold of the app.

Seriously, if you’ve had fun with these weird musical game-y apps in the past, you need VidRhythm. I’ve been having a blast with it. Also, if you like my weird dog videos, you’ll love my dog’s Facebook page.