Fans of the Stickman Skater [99¢/Lite] and Stickman BMX [99¢/Lite/HD] titles should definitely pay attention to Fun Mob Games‘ upcoming Pocket BMX. I’m actually a huge fan of the Stickman games, and I love how they’ve managed to cram all the complexity of pulling off tons of tricks and combos and distilled it down to a 2D platformer with simple touch screen controls. But, as much fun as those games are, they’re extremely mechanical and stiff. Your flip tricks and grinds are really just canned animations tied to different control stick directions, and it’s missing a certain layer of interaction that makes you feel more involved in the game. 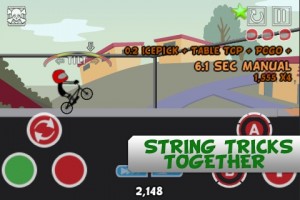 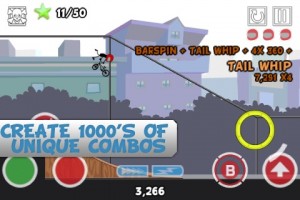 Pocket BMX looks to retain the simplicity of a 2D side-scrolling BMX game but raise the levels of interaction and trick complexity a few notches. Here you’ll be able to free roam throughout the game’s 7 different environments and challenge-based story mode. Your bike adheres to an actual physics system so you’ll be able to interact with the objects in the environment and pull off tricks in a more hands-on, organic way. It looks like there will be plenty of device tilting to balance and spin some of your tricks, in addition to the onscreen virtual button setup.

Fun Mob just announced Pocket BMX in our forums at the end of August with a few screens and a bit of info, and yesterday they have posted the first gameplay trailer of the game which shows what it looks like in action:

Pocket BMX is scheduled to arrive sometime this month according to the developer. I’m really eager to get my hands on the game to see just how well the free-roaming aspect plays out compared to the more linear Stickman BMX, and how easily it will be to pull off all the various tricks in the game. We’ll keep our eyes out for a solid release date for Pocket BMX which will be sometime in the next few weeks, and you can hit up our forums where the developers themselves are actively participating in the game’s discussion.