Following their successful co-release of Zen Wars [99¢] a couple weeks back, Liv Games put their noses to the grindstone to finish up a humongous update that’s been over 3 months in the making for their previous iOS title Legendary Wars [99¢/Lite/HD]. We certainly enjoyed Legendary Wars in our original review, but the game has been updated fairly regularly since its release in January and now includes all sorts of nifty new features like Retina Display support, Game Center, a native iPad version, and tons of gameplay tweaks and enhancements.

This latest update for Legendary Wars stands to be the biggest one yet. Liv Games has revealed that they recently passed the one million downloads mark for Legendary Wars, and all the hard work they’ve been pouring into this massive update is really a way to say thanks to the many fans of the game for their great support. 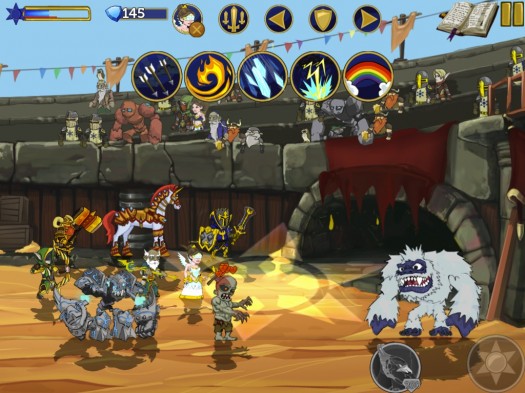 The biggest new feature in the forthcoming update is a brand new Arena Mode. Here, you’ll be able to pit your stable of heroes against many different monsters and new types of challenges. The catch is that you can only spawn each hero one at a time, and rather than mine for gems you’ll need to collect them from defeated monsters. It sounds like a whole lot of strategy will be needed in Arena Mode in regards to who and when you choose to summon certain heroes and how you manage your stock of gems. You can see screens from Arena Mode for both the iPhone and iPad versions of Legendary Wars.

Other new goodies to look forward to are several new monster types, a new Spell Book with 5 upgradeable magic spells that will give you the power to cast epic full-screen attacks, a new Monster difficulty level for those looking for a challenge beyond Legendary difficulty, and a new Miner upgrade that will start you with gems right off the bat so you can start building up your army of heroes without waiting. Also, a new Healer unit joins the cast and will have an interesting mind control ability that will allow you to take control of enemy monsters. 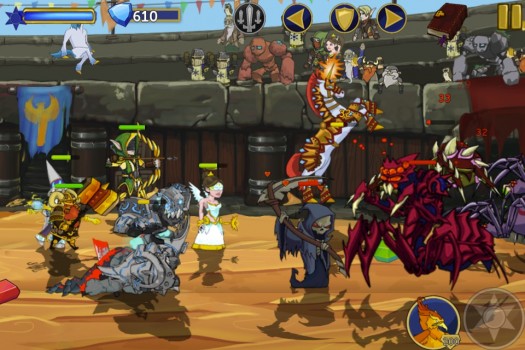 Coincidentally, controlling monsters is also a big part of Liv Games’ upcoming new title, Monster Wars, which they’re looking to have out this fall. There aren’t many details on Monster Wars just yet, but through the end of this month Liv Games is hosting an art contest on their website where you have the chance to get your own character into the new game. Be sure to check that out and we’ll definitely have more information on Monster Wars in the not-too-distant future.

As for the Legendary Wars update, it’s already been submitted to Apple for review and Liv Games is hoping to have it release by the end of this week. Be sure to keep your eyes out for it and don’t forget to stop by our forums for some more Legendary Wars discussion.