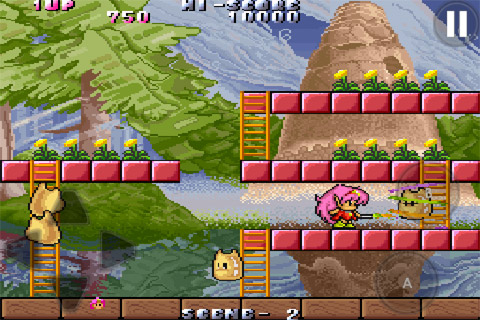 Retro gamers will be pleased to hear we’ve just gotten word from DotEmu that the fifth Jaleco title is just two weeks away.

Originally released to the arcade in 1990, Rod Land is a colorful platformer that challenges you to help a fairy rescue her mother who has been trapped in a tower by an evil force that’s building a mobile fortress with which to wreak havoc upon the land. Gameplay involves clearing each screen of baddies using your magic wand (or rod), collecting bonus items along the way for points. Your wand captures an enemy in a magic field that merely stuns them if released, or can be used to destroy them by bashing them to and fro against the ground, resulting in a power-up that can be used against other enemies. A level is complete when all enemies have been wiped out, but you’ll want to collect every bonus item along the way, in order to get the max three-star rating for any level.

See a video of the arcade version of Rod Land in action:

I had no prior experience with Rod Land, and so upon hearing DotEmu’s announcement, I grabbed the Amiga port to see what it was all about. An hour or so later, I sat the joystick down, pretty anxious for the iOS version to arrive — this game really is a whole lot of fun.

DotEmu’s release will be a universal app (for iPhone and iPad) and will be localized in English, French, Italian, German and Spanish. DotEmu CEO Xavier Liard informed me that Rod Land is the studio’s most polished and well-implemented Jaleco release yet. The iOS version runs the arcade original under modified emulation and features positionable virtual D-pad controls.

I’ve just received a pre-launch build of the iOS game and will post a closer look when the title goes live in the App Store on September 6th.