By all rights, Drawin’ Growin’ [$0.99] should be a good game. It was released by Taito, who ought to be riding high off the acclaim they’ve earned with Groove Coaster [$2.99]. It looks cheery and sweet, with a hand-drawn art style that charms. So how has it ended up so completely bland?

Things began well. Drawin’ Growin’ has a premise I can get behind. The plants of the kingdom have withered away, and Meu, a plant-loving sprite, is tasked by the King to fill the world with greenery. To regrow all the plants, you need to use line-drawing tactics to funnel sun to the sun-loving flowers, rain to the damp types and so on. You need to tap to keep them free of bugs, use your lines to protect them from lightning and volcanoes, and generally babysit them until they grow. It’s a frantic formula, but not a bad one. 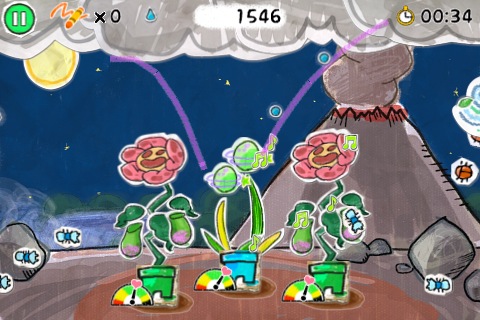 But after a while, the levels start to blend together. Levels offer a few different objectives, but they can all be distilled down to growing plants and keeping them alive. In many of Drawin’ Growin’s levels, succeeding at that task is punishingly challenging, especially without power-ups. The power-ups can do all sorts of things – increase the number or length of the lines you can draw, bring Meu out to protect the plants from bugs and disasters, and make the plants grow quickly. And as you progress through the game, Meu becomes better at using them. When I found myself having genuine fun with the game, it was because I’d carefully selected just the right item to pull out for a particular level. Too bad that fun couldn’t last.

For some reason, Taito has locked the power-ups behind a pay wall. There are a few given out on completing levels, but those just give you a taste. If you want more, you’ll need to cough up some cash. It makes perfect sense to charge in-game coins — keeping players from abusing them — but by limiting those coins to in-app purchases rather than handing them out for skilled play, it just makes the game’s failings more apparent.

As the King drags Meu through the levels and puts him to work, I found myself wondering why I was bothering. Meu didn’t seem to want to be there, and as the game progressed, neither did I. I wasn’t really having fun, I was working — and if I wanted to make that work more tolerable, I’d have to put in my own money. When I’d lose the King would toss me a pity power-up or two, keeping me from ever being completely stuck. But if you want someone to buy your consumables and keep coming back, you have to give them a reason. Instead, I realized that paying to make Drawin’ Growin’ tolerable wasn’t worth it. There are plenty of games out there that respect my time and money, and this isn’t one of them.