I don’t often reflect on why I want to progress in a game. The journey is usually enough — tell me that the hero wants the MacGuffin, and I will do what it takes to get him to it, no questions asked. Not so with Loopycube’s Pickpawcket [$0.99]. Our stealthy feline protagonist wants to reclaim the classic paintings stolen from the cat art show, and dammit, so do I.

Not that the journey isn’t fun — its stealth action puzzles are quite entertaining. But the paintings awarded by completing each of the game’s 60 levels are a great motivator. Loopycube painstakingly recreated 60 classic paintings, one for each level, and then filled them with cats. Impressionist cats, dadaist cats, renaissance cats, pop art cats: you name it, and it’s probably in there. The paintings range from neat — I’m particularly fond of The Kitty Night, a rendition of Van Gogh’s The Starry Night — to disturbing, like the anthropomorphic take on Alphonse Mucha’s “Dance." How do you put a game down when the next level holds a reward like that? 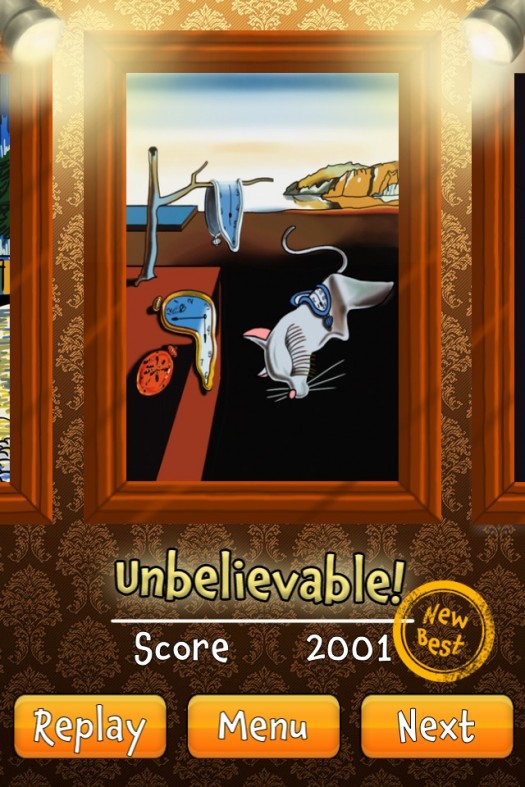 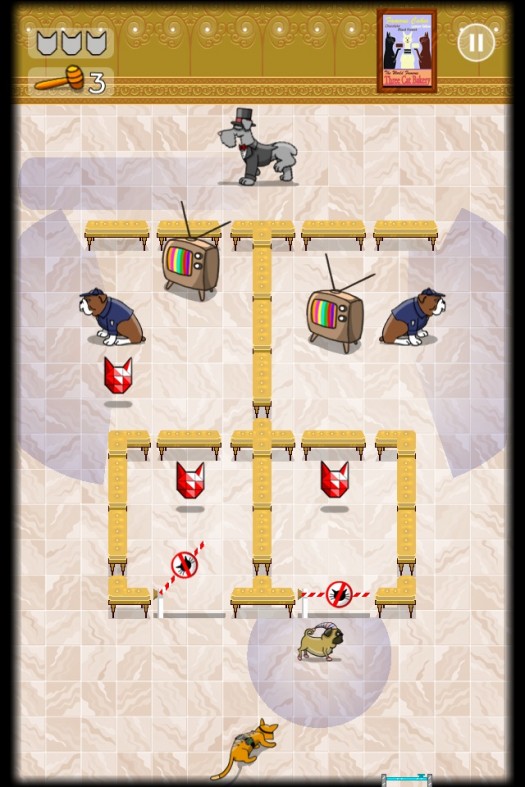 To earn your reward (conveniently wallpaper-sized on iPhone), you’ll need to sneak a cat burglar into a guarded gallery, snatch the painting, and get out. Guard dogs are arrayed to stop you, and entering their field of vision means an instant level reset. Luckily, these dogs are pretty much blind. This is a puzzle game, not Metal Gear. You can see their range of vision at all times — all you have to do is stay out.

This is, of course, easier said than done. There are three type of guard dogs (schnauzers, bulldogs and pugs), and they each have their own pattern of movement and range of vision. In a given level you’re likely to encounter several dogs, each following a set patrol route. Memorizing those patrols will get you through most of the early levels.

As you make your way from the Metrodogitan to the Doggenheim, Pickpawcket introduces more complex puzzles. The dogs get lasers, walls and doors, and the cat gets dog disguises, televisions and other distractions. These allow you to complete the levels with a bit of finesse — while following patrols relies on rote memorization, knowing when to trigger a television takes timing and precision. At around the game’s midway point it also introduces stuns, and gives you three per level. You’re better rewarded if you can do without them, but providing the option allows the game to get much more complex without leaving players too stuck.

It was in these later levels that the game’s controls started to fail me at times. Pickpawcket offers two control methods. You can tap and hold to move, or you can turn on a virtual joystick. I found the joystick control abysmal, but some portion of players may prefer it. The tap control, on the other hand, is quite good – but there’s no way to avoid occasionally having your finger block your view. Once you reach a certain point in the game, what you can’t see definitely can kill you.

But that’s a small inconvenience in a large, fun game. Pickpawcket succeeds where it counts, with challenging gameplay that rarely dips into frustration. When it does, knowing that something interesting (or hilarious) awaits you at the end of the level will keep you pressing onward. Check it out, and post your impressions in our discussion thread.