At first glance, Candy Boy [99c / HD] by Colorbox looks like a regular one-screen platform game – and to some extent it is. You control Casper, who runs, jumps and long-jumps around the level, climbing over blocks, collecting three coins and trying not to fall into water or holes. And in later levels there’s enemies to avoid. Yup, that certainly sounds like a platform game. But, at its core, Candy Boy is actually a puzzle game, based on completing match-3 puzzles . There’s no standard rectangular match-3 game-board though, as the blocks are often distributed around the platform level.

Here’s how it works:  Casper walks around carrying a colored block of candy above his head, which he can drop anywhere on the level. If he places the candy next to two other candy blocks of the same color, they disappear. In many match-3 games the goal is to achieve a certain number of matches, or to move objects to the bottom, but here the goal is to destroy three “hateful worms" which have invaded Candy Boy’s sugary homeland. The worms are colored too, and hide amongst the blocks, so by matching them with candy of the same color, you destroy them. They are stylized square worms, with wide open mouths! 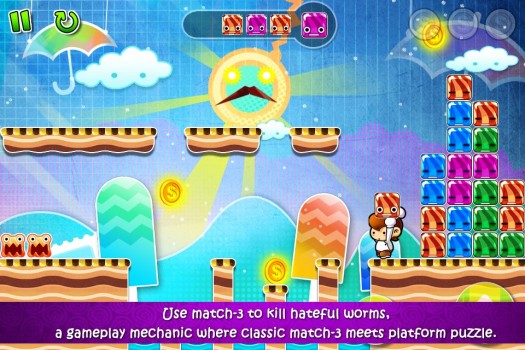 To make things tricky, candy blocks can’t be moved once dropped, so some thought is necessary to ensure your candy is placed wisely. Also, you receive a set number of blocks to solve the puzzle and have no control over the order they’re released, which adds to the mental challenge. Sometimes the blocks must all be used in exactly the right places, so one mistake and you have to restart the level. However, the upcoming block colors are displayed at the top of the screen as a hint, much like how Tetris displays pending blocks before they appear so you know what’s coming.

Candy Boy delivers a whopping 100 levels across 4 worlds, with Game Center / OpenFeint integration for rankings and 13 achievements. This will provide hours of game-play, although it would be nice if the achievements had more rewarding titles than “Achievement 1" up to “Achievement 13". If you get stuck you can skip ahead to the next level by exiting from the pause menu, although a certain number of coins is required to unlock each world. The first few levels are extremely simplistic, involving only a few blocks as you learn, but then the difficulty curve slowly increases, as the candy blocks pile on top of each other.

The controls are alright, but not perfect. There’s buttons for left, right, jump and drop block. Climbing over the piles of blocks works perfectly fine, but when jumping up to small ledges or moving platforms, it’s frustrating to fall multiple times where I wouldn’t normally. And I’m blaming the controls and specifically, the jump button. Fortunately this doesn’t happen too often.

If you’re specifically looking for a regular platform game, this one’s probably not for you. This is not a side-scrolling game and the emphasis is mostly on the puzzles. Try something like League of Evil [99c / Lite], Mos Speedrun [$1.99 / Lite] or Max and the Magic Marker [99c / Lite] (and there’s plenty more great regular IOS platformers out there, some of which are mentioned in this thread). But, if you love match-3 puzzles then this cute and colorful cross-genre platform / puzzle game may tickle your fancy. This may not be the first game to mix these genres, but it’s always wonderful to see creative experimentation in the AppStore.