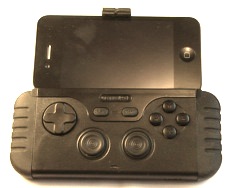 After what seemed like an eternity of waiting as we followed the iControlPad’s development, we finally got our hands on one not too long ago. We mentioned a few issues that we had with the device which mostly were due to the way the current iControlPad firmware handled sending controls to the iPhone compared to how the iCade works. (This was all detailed in the previous article.) However, one of the strong suits of the iControlPad is that it seems to have an infinitely updatable firmware, and the developers behind the device recently released an update to make the iControlPad behave a lot more like the iCade– Potentially alleviating most of the issues we had with the device’s functionality.

To get the firmware update, head on over to the support section of the iControlPad site and follow the instructions. Alternatively, if you prefer watching a tutorial video to reading, the guys behind the iControlPad have got you covered on that front too:

Once you’ve got your iControlPad all flashed to the new firmware, it should behave just like a iCade and allow you to use the iControlPad when playing the various iCade-enabled games. This new firmware option might also quicken adoption of the device, as now developers can focus on one standard across both the iControlPad and the iCade instead needing to deal with one or the other (or both).

In light of this update news, they’ve dropped the price of the device to $49.99 for TouchArcade readers. To get in on this deal, order through this link. This special pricing will be good until Monday, at which point it will return to its normal price of $74.99.