Oyatsukai’s Fractal Combat [$1.99] is an aggressively arcade-y third-person aerial combat game that initially reminded me a lot of Rogue Squadron. It isn’t a licensed product and its universe is nowhere near as fleshed out as the Star Wars fiction, but it does have a similar over-the-top sci-fi style coupled with a simple control scheme and targeting systems. While it’ll bore you at times with its uninspired instance-based content, Fractal Combat’s click-treat action and overall ease of use is entertaining in bursts. This isn’t a gold medal winner; it’s an okay game with strong drivers that’ll keep you invested in an otherwise shallow experience.

On a mechanical level, this is a third-person shooter first and foremost, which charges you with the wholesale slaughter of various randomly generated ships and ground-to-air missiles in a series of rote missions. As for the flight part of the deal, this is more of a hover game: momentum, speed, and general stick-jocker-y aren’t things that this does well. 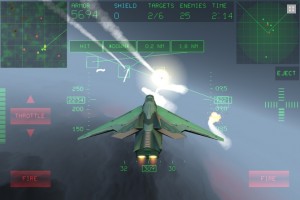 In part, this is due to the controls. The game trades finesse for slick tilt functionality that adjusts the dead zone based on how you’re holding your device. On the other hand, the super forgiving auto-targeting systems and relatively dumb AI saps combat any kind of combat nuance, too, which leaves you with a game purely focused on destruction.

It almost goes without saying, but Fractal Combat doesn’t hold up in the context of other flight games due to its arcade-centric, baby’s-first-flight game approach. The real meat of is simply in the thrill of the kill and the satisfaction of a “mission complete.” It’s built to be simple, in other words, and it clicked with me pretty fast as a result. 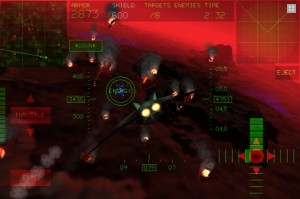 One of the most effective drivers outside of the core action is its persistent upgrades. As you play instances, you’ll be given in-game cash that can be exchanged for new weapons, new HUDs, and even new aircraft. New pathways unlock as you play, meaning you’ll spend a lot of time exploring new levels and progressing, all the while going back to old levels to grind.

Most levels are simple search-and-destroy missions seemingly created from the same uninspired software that auto-generates RPG fetch quests. The elaborate HUD gives you a clear indication of where your targets are in relation to you at all times, making the missions pretty easy to clear. The HUD will also tell you when your enemy radar is being jammed, when to fire, and it can also point out shield “energy” drops, all in the name of convenience.

Really, I think all the problems of Fractal Combat can be boiled down to two words: safe and uninspired. If it had the slightest creative spark, it’d be enough to really pull me in. As it is, this is a fully functional arcade action game with cheap thrills and an upgrade system that, if it hooks you, should keep you plugging away for 10-15 minute bursts. I wish there was more, but there’s enough here to recommend a look.