It’s been ages since we first posted about Godville [Free], over a year in fact. Since then, my character, Lil Buddy, has gone all the way from level 1 to level 25– With no interaction from me aside from some random encouragement on the way. If this is the first you’ve heard of Godville, let me explain how it works for you.

Godville is a game with no gameplay. You play as your character’s god and watch over him or her as they go on their adventure. Along the way they’ll fight monsters, come across towns, gather and sell loot, along with all the other activities that an adventurer that is adventuring, would be doing. Your interaction with the game, your hero, and the entire game world is limited to vague suggestions that you can give from the heavens. You can send your hero messages, as well as praise or punish him. There’s some other very minor interactivity, but by and large Godville is a game that plays itself. 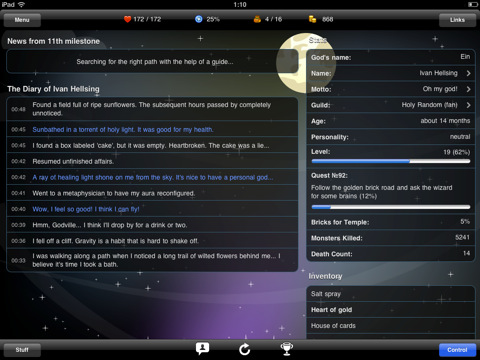 If you’re thinking to yourself, “Well, that’s pretty stupid," I assure you it’s not. This game has kept my attention for an entire year, and I love checking in to see what Lil Buddy is up to. Think of it as a fantasy-based virtual pet that you can complete ignore for months at a time if you felt like it.

Since we first posted about it, Godville has gotten an array of updates. First off, it’s universal now and “plays" great on the iPad. There are multiple themes for how the game is displayed, and it even switches automatically between night and day themes depending on when you play. Your character can have a pet companion now, such as my newly acquired level 1 firefox named “Behemoth". Items that can be activated with effects that range from useful to deadly are now in game, and you can even send your character off to duel against other heroes. Oh, at some point Game Center achievements were even implemented. 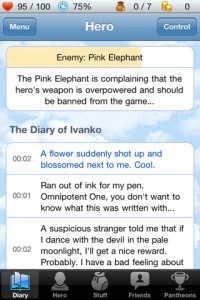 My favorite new feature (and the reason for this post) is the new “Third Eye" functionality. Since Godville is a game that plays itself automatically, you’ll often miss a lot of the cool things your character might have done if you’re not checking up on it often throughout the day. After your hero has completed 5% of its temple it is building for you (which will take quite a while if you’re starting fresh) you’ll be able to enter “Third Eye" mode. This displays the “most important" events of your character’s life over the previous hours (or even days).

For instance, in the life of Lil Buddy these events include the duel that he won with someone named “Surfer Obeyer", coming across his new animal companion, and running into “a strange man with a floating exclamation mark above his head."

If it wasn’t clear already, you’ve simply got to try Godville. It fits perfectly into the boredom rotation of checking your email, Twitter, and Facebook. Also, the content in the game is all community driven so your hero always seems to be doing something different. I’m also endlessly amused by the amount of depth they’ve managed to wedge into a game with no gameplay to speak of. If you downloaded Godville when I first suggested it last year, chances are, your character will even still be in game adventuring… Assuming you can remember the login and password you originally set up to retrieve him.