The line-drawing genre has long been dominated by Firemint’s outstanding Flight Control [$0.99 / HD]. It is the standard by which all similar games are inevitably judged, and with good reason — it’s the granddaddy of the genre. But maybe there’s room for new games in the market, and in our hearts. It’s been over two years since Flight Control was released. Could it be time for a break, time to see other line-drawing games?

If so, you won’t go wrong with Chillingo and Infinite Degree’s Pollen Count [$0.99 / HD]. It’s a game that didn’t sell me with screenshots or trailers — the art is a bit clumsy — but it comes through where it counts.

By drawing a line on screen from bee A to point B, you direct your bees to collect pollen from flowers and deliver it to the hive. They need to reach both targets without running into anything en route. Though the obvious comparison is Flight Control, this is more in line with Harbour Master [$1.99] – you’re moving cargo from place to place with a limited amount of space to deal with. In this case, there are only a few flowers to go around, and often bees are forced to wait in the wings. Managing the scarcity of the flowers adds a layer of strategy to a familiar formula. 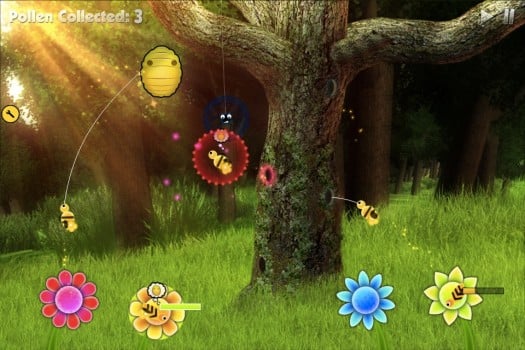 Pollen Count distinguishes itself in progression. Rather than throwing down a set of maps for players to challenge themselves on, Infinite Degree has put together a series of unlockable levels that give the game a more traditional difficulty curve. To unlock them, you need to earn at least one star in the previous level. This usually isn’t easy, and even the most experienced Flight Control fans will find earning a full three stars a challenge on most levels. Unlocking stages also gives less experienced players something to work toward, if the top of the leaderboard looks completely out of reach.

So how do you keep 24 levels fresh when you’re dealing with a single-screen drawing game? Pollen Count handles that challenge by bringing in obstacles, powerups and other clever elements. Spiders, birds and zombees are all out to get your bees. While you’re busy guiding them to avoiding those enemies and deliver pollen, you’ll find environmental obstacles to deal with. And some bees are just plain picky about the flowers they’ll harvest. It all contributes to keeping the game from getting stale.

If you want more, Pollen Count includes Crystal and Game Center achievements to earn and leaderboards to challenge. The iPad version also includes local multiplayer, both co-op and versus, with configurable levels. If you’re really dedicated, you can unlock two special modes — a zom-bee survival mode and an odd 3D racing mode called 999mph — but neither offers leaderboards.

I wouldn’t write Pollen Count off as nothing more than a clone. It makes great use of an established mechanic, and I’d have a hard time holding that against it. Running with an existing idea is an App Store tradition by now — the important thing is that it’s been done well and it’s been done respectfully. Pollen Count is a little rough around the edges, but it has the vital element covered: fun, and lots of it. Check it out, and give our discussion thread a buzz.