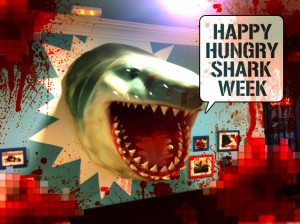 We originally checked out the first Hungry Shark way back in April of last year, and found it to be a really enjoyable arcade game. You played the role of a shark swimming through several interesting sea environments chomping on lesser sea creatures and humans alike in an effort to satiate your hunger and increase your size. Hungry Shark got more than twice as big with a gigantic Part 2 update that was released a couple of months later, and earlier this year in February they brought the series into the HD realm along with another completely new environment to play through with Hungry Shark Part 3.

Back in June, Hungry Shark developer Future Games of London quietly released new versions of Part 1 and Part 2 with the HD graphics treatment as well as some bonuses available as in-app purchases. All of the various Hungry Shark games have been available for free for a while barring Part 3 and the all-encompassing Hungry Shark Trilogy HD for iPad. To celebrate Shark Week this week, they have temporarily made Part 3 free as well and dropped the iPad game down from $4.99 to 99¢.

There may be a confusingly large number of Hungry Shark games to choose from, but as long as you can figure out which features you need then these games are a ton of fun and totally worth grabbing for free. If you have a Retina Display device, you’ll want to pick up Part 1+ or Part 2+ to take advantage of the high resolution graphics. Owners of 1st and 2nd generation devices will want to grab the original Part 1 or Part 2. If you’re looking to play on the iPad, then the HD trilogy is a steal for just a buck, as it includes all 3 episodes in one app and has high resolution assets. Whichever versions apply to you, make sure to at least pick up one of the Hungry Shark games and assert your oceanic dominance while watching all the cool shows during Shark Week this week.