LambdaMu Games brought us Infinight [$1.99 / Free] earlier this year, and as we noted then, it’s one heck of an atmospheric game. We anticipated big things from them in the future, but Dice Soccer [Free] isn’t quite what we were expecting. Still, dice and soccer – has there ever been a more perfect pairing? Peanut butter and jelly has nothing on this one.

I kid, but they do make a surprisingly good fit. When you’re up against AI opponents, there’s always an element of trying to beat their numbers with your numbers. Dice Soccer just lays that process bare, and puts you in control of everything but chance itself.

Each match you play in Dice Soccer is split up into individual interactions, like taking possession of the ball, progressing down the field, and eventually shooting at the goal. For each, your line of three players is reduced to a roll of three dice. If the total of your dice is higher than the opposing line’s total, you move on to the next step. If they beat you, they’ll take possession and try to press the advantage. 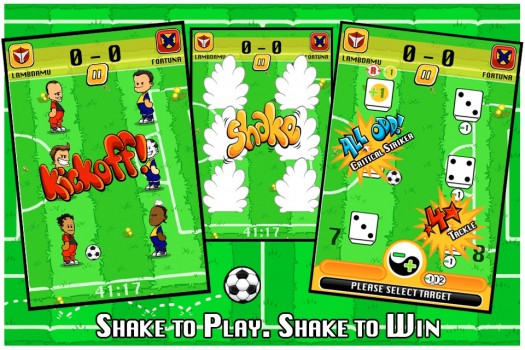 If this sounds far too luck-based, don’t worry — you’re given much more control than you’d expect. Though the dice are six-sided, there aren’t six set results. Each player has his or her own selection of possible results, and most have special abilities on top of that. Luck will always play a part, especially in one-on-ones against the goalie, but you can strategize both in team building and in applying your bonuses each round. Once you’ve unlocked a few players, you’ll be able to work on stacking your deck for crazy combos. I wish for multiplayer, if only so I could imagine the other player’s grief when I roll a 36 to his 4.

My other wish is for a slightly faster experience. Each match is made up of a number of turns, and turns are long. The rolls take just a little too long, the animations are just a little too slow. Everyone seems to be enjoying a mellow day out on the field, occasionally leaving me as a rather bored observer. It gets worse when you’re evenly matched with your opponent — instead of watching a lazy day of scoring, you’re watching while the teams swap possession back and forth while they run down the clock. Not that that’s unlike some soccer games I’ve seen, but I’d still prefer something a little more fast-paced.

If you’ve got the patience to stick it out, though, Dice Soccer will give you more content than you can handle. There are 75 matches to play, and more coming. There are three leagues of increasing difficulty and tournaments in each. There are also 50 Game Center achievements to earn, and each of those achievements unlocks something new for your team, usually one of the 80 available players. Those players all have their own individual looks, powers and backstories, too. You can even recruit the team streaker.

The crazy thing is that LambdaMu has laid all of this out for free. There are a few unlockables that need to be paid for, but nothing game-changing. Of course, the game gives you plenty of opportunities to sink in a lot of cash, but you only need to do so if you want to unlock players quickly or buy unique outfits. We keep hearing developers say that they’ve looked at the freemium market and want to retool it to make games they’d find fun, and this definitely feels like one of those games. It’s fun to play, it’s more than just a time sink, and you really don’t need to pay to enjoy yourself.

If any combination of dice games, deck-building and soccer sound fun, you really need to give Dice Soccer a shot, and be sure to stop by our forums to read further impressions or leave some of your own.