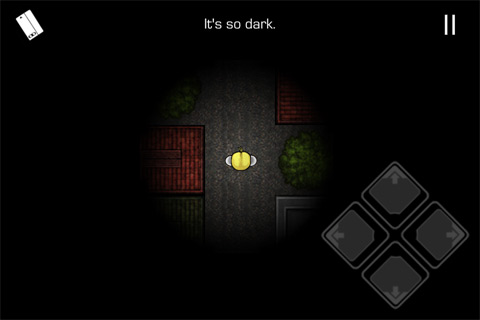 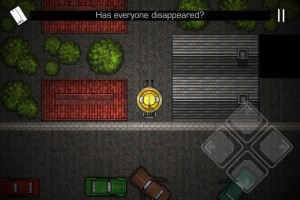 In Infinight, darkness is your enemy. The game starts off with you waking up in an abandoned hospital shrouded in darkness, with no memory of who you are or what has brought you there. You wander about trying to solve the mystery of just what in the world is going on, but it’s a challenge as you can only see a few feet in any direction save for the occasional flashes of lightning (and, later, occasional illumination pads and the like). And bumping into walls isn’t the only hazard; mysterious vortexes (which cannot be seen without outside illumination) and burning holes that open and close litter the terrain and stand to do you in. 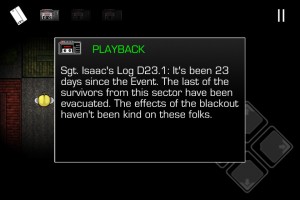 You must traverse 50 perilous levels, across several environments in this fashion — from the start point to the distant exit — before finding the real truth. Along the way you can collect tape recorders which contain clues, from both yourself and others, that slowly help piece together the mysterious puzzle, but finding them often leads you well off the path to the exit, introducing further peril. And certain levels add a bit of haste to your step as you try to avoid an ultimate darkness that sweeps slowly across the level — think The Nothing from The Neverending Story. The whole scenario is a rather clever gameplay mechanic.

Adding to the stark and eldritch atmosphere is a constant, sinister audio track that comes together with all the rest to really set a mood. It’s creepy. The Retina display is supported, where available, with graphics the developer claims are so sharp they’ll cut your eyes out. (More creepy.)

The game is controlled via onscreen D-pad (which can be positioned on the right or left of the screen) which moves you one space on the game screen in the direction of your tap. You’ll want to be precise with the controls, or it’s curtains.

An online multiplayer mode involving both a Runner and a Chaser that plays live over Game Center is demonstrated here.

Infinight is not a fast-paced game — so much so that likely some gamers will find frustration — but it is evocative and challenging. Puzzle fans who like a slice of atmosphere to go with their quest for the goal should enjoy what Infinight has to offer.