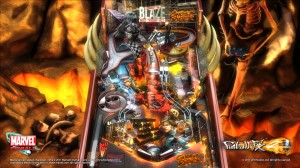 Marvel Pinball is a big deal in some circles. It’s often hailed as one of the best digital pinball translations known to man, which isn’t saying a whole lot since the lion’s share of these kinds of games are bad-to-middling. But, anyway, its reach will expand in the near-to-mid future. At Comic-Con in San Diego, it was revealed that the game is coming to iOS and every other console or handheld device (including Android) under the sun by the end of 2012.

No other specific details were noted about any upcoming version, but it appears as if the port work will remain in the hands of Zen Studios — a move that bodes well for the game since Zen knows what’s what with digital pinball and pinball physics in general.

Notably, a new DLC pack was announced, too, at the event. It will bring in a total of four new tables later this winter. One of them will be Ghost Rider-themed, as you can see from the above screenshot.

I can imagine a scenario in which, if this iOS version is significantly late to the party, this update as well as the others is rolled into the overall package. Then again, that doesn’t make the best business sense… Zen Studios would probably love the extra revenue stream IAP could provide. Regardless of the business plan, we’ll be keeping a look out for this one out as it creeps towards release.