One of the things I love about the App Store is that even after 3+ years it still has the power to surprise me with a game release that I never would have expected. Over the weekend, Namco Bandai finally released the first Tekken game for iOS. Unfortunately, it’s not an actual fighting game, but rather a mini-game called Tekken Bowl [Free].

Tekken Bowl was a bonus mode of sorts that was included with the PlayStation 2 release of Tekken Tag Tournament. Tekken Tag was the first game I bought for my PlayStation 2 after sleeping outside of Best Buy to secure a day one purchase of the console. It was a phenomenal fighting game 10 years ago and still holds up well today. Namco Bandai is currently in development of a sequel to the game coming to arcades later this year, and presumably to consoles after that.

It’s been quite a few years since I’ve picked up Tekken Tag Tournament, but I remember being quite fond of the Tekken Bowl mini-game. Alas, those were simpler times back then, and Tekken Bowl’s simplistic gameplay doesn’t do much for me in this day and age. It doesn’t help that the iOS version is really scaled back from the original, though it does contain some new elements unique to this version. 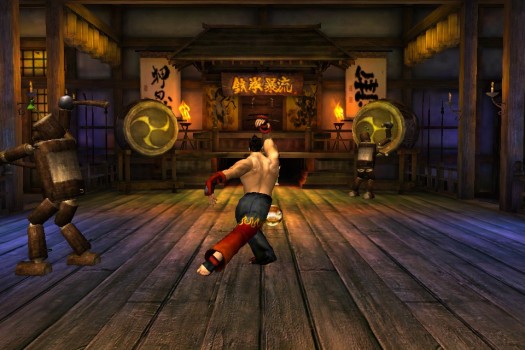 There are only 3 characters to choose from in Tekken Bowl: Xiaoyu, Jin, and Panda. Each have slightly different attributes in the areas of power and control when bowling. You can play through a regular 10 frame game either by yourself or with 2 using 1 device pass-n-play style. There’s also a puzzle mode where your job is to knock down all the pins in each of the 30 levels, which are adorned with ramps, gaps, explosives, and other elements. You’re given a predetermined amount of balls to knock down the pins with, and can earn bronze, silver, and gold medals based on how many you use to get the job done.

The thing about the main bowling game is that it was designed for a console with buttons, and this hasn’t really changed in the transition to a touch screen. You adjust your player position at the bottom of the screen by dragging, then tap on a set of moving meters to determine both how straight and how powerful your shot is. It’s extremely simple but works alright, it just would have been nice if they implemented more natural swiping gestures to determine your shot like most bowling games on the App Store.

Strangely, the puzzle mode of Tekken Bowl does implement a different control scheme that’s more catered to a touch screen, but it’s not really that great either. Here, instead of the old-school power meters, you’re given a triangle shape on screen that represents both the angle and power of your shot. Simply drag a bowling ball icon where you want on the triangle and it will send your shot out based on where its placed. Again, this method works, it’s just not very fun. Plus, the puzzle mode often requires a level of accuracy that’s not possible with the chunky ball icon and triangular meter.

All in all, Tekken Bowl is pretty unremarkable, which is a shame because it has a lot of potential. If it had a full roster of characters, a decent amount of modes, some sort of persistent single player career, and new controls that utilize the touch screen better, then Tekken Bowl could have been a pretty cool little game. As it is now, it feels very much like the mini-game that it originally was, though sadly, it’s not even as good as that version.

Tekken Bowl’s mediocrity largely gets a pass because it’s free, it’s universal, and the graphics look pretty decent. Hopefully this release is just a teaser of sorts and Namco Bandai are planning on releasing a full-fledged Tekken fighting game for iOS in the near future. It’s already been proven that a fighting game can work really well on the touch screen, and the Tekken franchise leaves a gaping hole in the genre with its absence on the App Store. Time will tell what happens on that front, but in the meantime Tekken Bowl is worth the free download if you’re curious or looking to scratch that nostalgia itch, just don’t expect much from it.