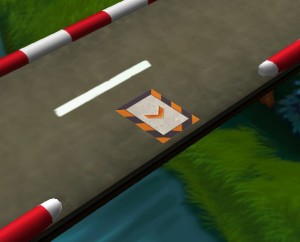 It should be no secret that we’re pretty big Disc Drivin’ [$1.99/Free/HD] junkies around here at TouchArcade. Well, almost all of us (I’m looking at you, Eli). Disc Drivin’ launched back in December of last year, and we were pretty much hooked following our review. Since that time, I’ve continued to play the game every single day without fail, and I honestly can’t say that about any other iOS game.

But lately, I’ve noticed that my playtime (and the playtime of the many dedicated friends that I am usually playing with) has started to dwindle. Normally I’m running at least 15 to 20 games at a time, but in the past few weeks that number has shrunken down to a mere 4 or 5, sometimes less. As can happen in even the best of relationships, things were just starting to get a bit stale around the Nelson-Drivin’ household.

Enter developer Pixelocity Software, ready like Cupid to shoot a new update into the posterior of Disc Drivin’ and ignite our romance once more. This marks the third big content update to the game, as it received online matchmaking back in February and 3 brand new tracks as well as a refined UI back in April. This newest update adds another 3 brand new tracks, for a total of 18, as well as a new track element called the Flipper. You can see the overhead design of each of the tracks in the icons below:

As for the Flipper, pictured at the top of this post, you’ll come across this obstacle placed in various parts of the ground in each of the 3 new tracks. When you slide over it, it propels you forwards and upwards, catapult style. This can either be a very good thing or a very bad thing, mostly depending on where you end up finally landing. The faster you’re going when you hit the Flipper, the farther you’ll get launched, so there should be some good strategic uses of the new object if utilized correctly.

If you haven’t yet tried Disc Drivin’, I highly recommend downloading the fully-featured ad-supported version for free and giving the game a spin. It’s one of those games that you won’t be good at right away, so give it time and practice. You can ask advice or find opponents in the game’s discussion thread in our forums, too. If you like it, the ad-free version is currently $1.99, and you’d be fueling support for even more updates down the line. This newest update to Disc Drivin’ is already done and submitted, so keep your eyes peeled for it to go live most likely sometime in the next week.