Pixelocity Software is a development team of two brothers who have previous experience in the game industry working on big name console titles. They decided to branch out and form their own studio in an effort to create smaller, more fun-focused titles. Based on their first iOS offering Disc Drivin’ [$2.99/Free], they’re off to a pretty fantastic start.

Disc Drivin’ is a turn-based racing game that can be played locally or online with up to 4 players in each race. If “turn-based racing game” sounds weird to you, you’re not alone, as I had trouble envisioning how something like that could work or even be fun when I first heard of the game. However, once I actually tried Disc Drivin’ it quickly became clear just how brilliant an idea it is. If you’ve ever played the board game Pitch Car, this is essentially the video game equivalent. It’s missing a couple of online features that keep it from realizing its full potential, but the foundation is solidly in place for what I can only describe as Words With Friends [99¢/Lite/HD] meets racing. 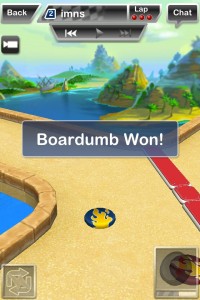 In Disc Drivin’, cars are replaced with tiny discs that are advanced down a race track one flick at a time. Choose what direction to aim your disc, and the power and angle of your flick determines the course the disc will take. Physics play a role as your disc will slide along the ground like a shuffleboard puck and bounce off of walls and other objects along the track. Once you’ve flicked your disc and it finally comes to rest, it’s the next player’s turn, and play continues like this as you each make your way around 3 laps of a track to complete a race.

Various special move can also be used to spice up the racing. Sliding your disc along the track or bumping into other players’ discs fills up a power gauge, and once this gauge is full you can unleash one of the 6 special moves in the game. These include a speed burst, the ability to stop on a dime (handy if you’re about to fly off a track), and a jump for leaping over obstacles or taking shortcuts, among other moves. Also, each of the 12 different tracks are filled with obstacles, like speed boost pads, pinball-like bumpers, and ramps.

The way that players each take turns moving is what makes Disc Drivin’ a perfect fit for the asynchronous online play it contains. You’ll take your turn, close out of the app and go about your business, and once the other players have taken their turns you’ll receive a push notification that it’s your turn again. In addition to online play, there is also local play over WiFi or Bluetooth and a single-device pass-and-play mode for up to 8 players. Sadly, there is no single-player component with computer AI to race against, and Disc Drivin’ is strictly a multiplayer-focused game at the moment. 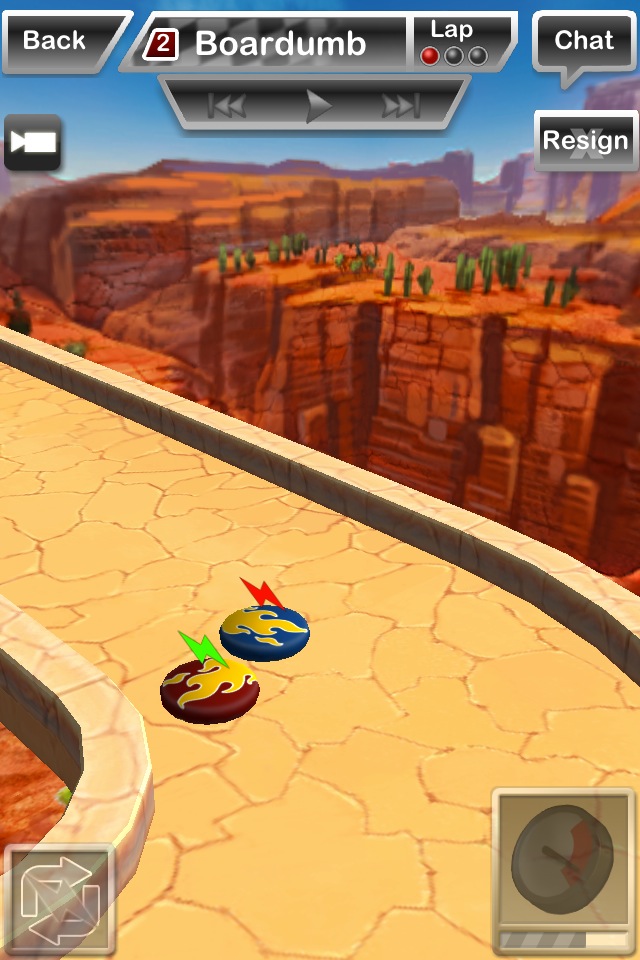 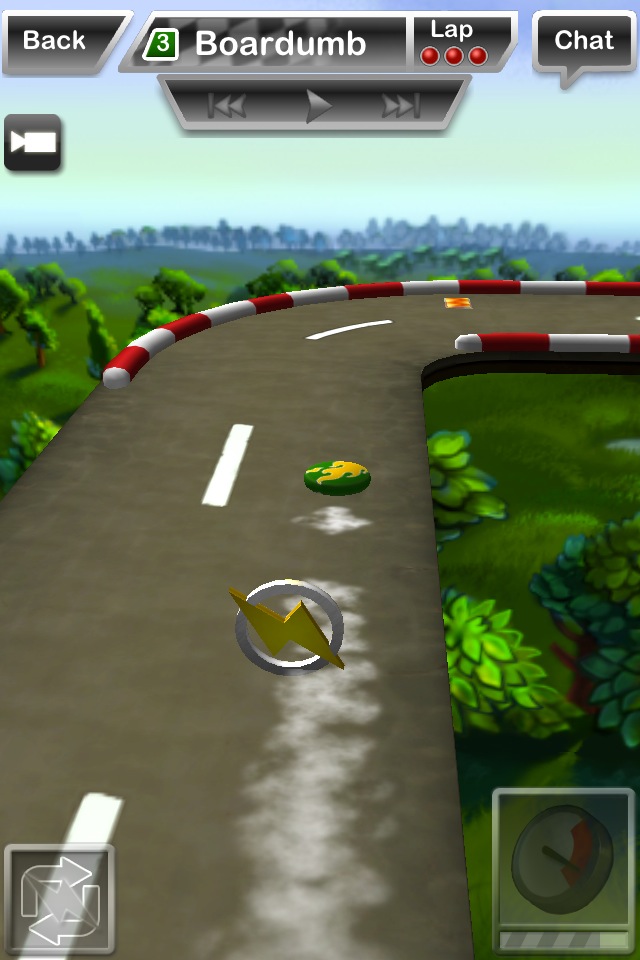 What’s funny about Disc Drivin’ is that it has actually been out for a couple of weeks, but I didn’t start to notice it until practically everybody in my Twitter feed was talking about the game and setting up matches with each other. And this brings me to my biggest complaint about Disc Drivin’, which is that there is no built-in way to find new players or match up with random people. You have to know the username of who you’d like to add to an online race beforehand, and there’s no friend list to keep track of who you play with. Both of these problems could be handled with the use of Game Center, but for now you’ll need to rely on reaching out to your fellow Man using social networks and the like for exchanging usernames.

There are a couple of really nice features included in the online games, though. First there is a simple text chat that is easily accessible anytime during a game, and while in my experience it’s mostly used for trash talk it can occasionally come in handy to compliment an opponent on a particularly nice move as well. The other great feature is the ability to watch a replay of each opponent’s previous move, which is extremely helpful to get you up to speed when jumping into a game after a period of time. Also worth mentioning is that while the graphics are fairly simple, they’re actually quite attractive. The tracks and landscapes are colorful and support the Retina Display, and the game runs at an incredibly smooth frame rate.

Even with the somewhat limited matchmaking, Disc Drivin’ is a total blast to play. The flicking mechanic works well and the physics in the game are floaty and fun. The special moves and the extensive number of well-designed tracks adds a lot of variety to the gameplay, and you’ll no doubt experience a lot of epic moments during races, like blasting into the lead with a speed boost, knocking an opponent off a track, or nailing a perfect shortcut jump to take a huge lead. Something about the gameplay is just so satisfying, and the turn-based nature fits into a busy lifestyle. In fact, I’ve been playing almost the entire time while I’ve been writing this review, and you can have up to 20 games going at once if you wish.

If Pixelocity can find a way to streamline matchmaking and add a friends list, and possibly even a single-player component for offline play, then Disc Drivin’ could be really huge. For now, you can check out the game’s thread in our forums to pick up some usernames and start up some matches. Even in its current form, Disc Drivin’ is still a fun and unique experience, and the free version is actually the full game supported with ads, so there’s no reason not to download it and take these discs for a spin.