Just a few short months ago, The 7th Guest: Infection [$2.99] emerged on iPad. It was iOS’s first great take on 1988’s Infection, and it was chock-full of nostalgia for PC players who looked back fondly on 1993, the year The 7th Guest made its debut. But if you lacked that nostalgic view of the subject matter, you might have found the game a bit mystifying. Enter Battle Slugs, [$0.99 / Lite] a reimagining of Infection that has a little more to offer the modern iOS gamer.

In Battle Slugs, players take turns placing their slugs. Each turn, you’re given two options: clone your slug to an adjacent hex space, or jump it to one a step further away. Wherever you land, you’ll convert adjacent enemy slugs to your team. The player with the most slugs on the board when there are no free hexes left wins. 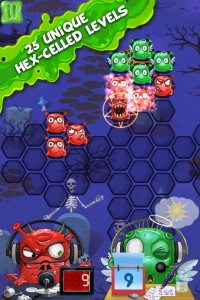 To keep this formula from growing dull, Battle Slugs offers a few different options for variety. You can play against AI of three difficulty levels, or you can play hot-seat multiplayer. Whichever you choose, you’ll have up to 25 different fields to choose from. The layout of the field can make a huge difference to the strategy you’ll need to employ to win, so this selection keeps things fresh for quite a long time.

You won’t have all the fields available at the start, however. You’ll need to unlock them by playing against the computer on previous boards and winning. This is easier said than done — even on easy difficulty, your AI opponent will put up quite a fight. The early fields are small enough that you can evaluate your errors and improve, but later levels get huge. You’ll need a strategic mind to master and unlock them all.

It helps that Battle Slugs throws in a ton of character to keep you entertained. The art is well-done and pretty adorable, in a mutated-slug sort of way. The music is also great — I’ve found myself listening to the title theme with its singing slugs an embarrassingly large amount. Whether you win or lose your matches against the game’s AI, you earn experience, and that experience goes toward unlocking locations. Locations are randomly assigned when you start the game, and they give you new backgrounds, loading screens and music to play with.

There are a few things that keep me from recommending Battle Slugs unreservedly. For one thing, like every similar game, this one’s hard. Even on Easy, the computer will probably stomp you a few times while you work out your strategy. It’s also a bit opaque. You unlock new fields by winning on two prior fields, but the game doesn’t make this obvious. Unlocking locations feels like a matter of bashing your head against the AI until you eventually earn enough experience, and even then there’s no way to pick where you’d like to play.

But those are minor complaints. Gameprom is building quite a reputation for great games, and Battle Slugs is no exception. According to their posts in our forums, there are more fields coming in an update, along with online multiplayer and Game Center achievements. There’s absolutely no reason not to check it out — it’s even Universal. Go grab it, and prepare to break against an army of devilish slugs.