Back in December, a clever little game called Disc Drivin’ [$2.99/Free] was released into the App Store. It’s a racing game where you take turns flicking tiny discs around a track against up to 3 other players. The game utilizes online asynchronous play, where you will flick your disc and it will then send the data to the next person playing and allow them to take their turn, and so on and so forth. When it comes time to be your turn again, a handy push notification on your device lets you know.

The entire gameplay system works wonderfully well, and although we enjoyed the heck out of Disc Drivin’ in our original review, there were a few aspects that we felt could be improved. Over the last several weeks, the game has received a couple of updates that have addressed many of these issues. An update from mid-January added the following: the ability to send out your username over Facebook and Twitter; a rematch button after a game had finished; a list of previous opponents to make it easier to start games with people you have played already; and finally a much needed help guide that explained the ins and outs of the game. 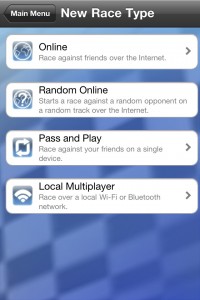 Today, developer Pixelocity has released the 1.2 update to Disc Drivin’ that adds the single most requested feature of them all: random online matchmaking. One of the downfalls to the original release of the game was that you had to know other players’ usernames in order to start games with them. This ended up not being a huge problem as players discovered each other over social networks like Twitter and Facebook or even from our forums. But for people without a huge social network presence, this new matchmaking option is an incredibly welcome addition. It currently only supports 2 player matches, but works effortlessly and is a really nice way to pick up a match when nobody else you know is playing.

Honestly, I can’t recommend Disc Drivin’ enough. Since the game was released, it’s basically consumed my everyday life and there’s never a time when I don’t have tons of games going on at once. I showed the game to practically everybody I met at Macworld last week, and have made many of them believers as well. With these past 2 updates I’m only liking the game even more, though there’s still room for improvement. I’d like to see the random matching include more than 2 players, some more in-depth stat tracking, some sort of custom discs, and of course more tracks.

Still, Disc Drivin’ has provided me with more entertainment than I ever thought possible, and with a fully-featured ad-supported version of the game available for free there’s not reason not to give it a try. There’s a general discussion thread or a specific username trading thread in our forums where you can find people to play, and of course thanks to this latest update you can just dive right in and match up with total strangers online now too.