I wouldn’t call Firaxis’ Sid Meier’s Pirates! a true follow-up or a sequel. It’s more of a re-imagining of the classic Commodore 64 game that clutches the original’s foundation to its breast, but also builds on that source material with much more overstated mechanics and systems. It also has what feels like a larger, richer world. If I had to pin down just one thing that Pirates [$3.99] on the iPad has to share, it’s that  by updating, refining, tweaking and adding the classic’s mix of simulation and strategy, Firaxis has made a game that’s even more of a blast to play.

I missed out on the 2004 original that this version is based on, so you’ll have to excuse my fawning. From what I gather, this is a pretty close translation. What is different is its new, much more flat look and the implementation of touch, which works well enough, but also tends to feel imprecise and unresponsive when the action gets hot. 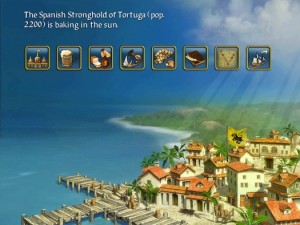 Pirates tells the dull tale of a young lad bent on revenge after his family is kidnapped by a group of debtors with funny things stuck in the brim of their overlarge hats. It’s a boring hunk of narrative to begin with, and it’s also one that comes off as disingenuous. All the threads of story that nap while travelling courtesy of your “Rescue Your Family” map are just cold, mechanical excuses to partake in sub-games like, for example, the oft-used “construct a another map by killing evil barons” sub-game.

As odd as it sounds, the core of Pirates resides outside of this goal. In equal parts, you’ll be able to try to find your family members and seek fame and fortune. In the process, you’ll spend a lot of time bombarding and pillaging cities, pillaging galleons, pillaging people, and dancing with governors’ daughters until your lad morphs into a toothless old man and is forced to retire from his swashbuckling days. 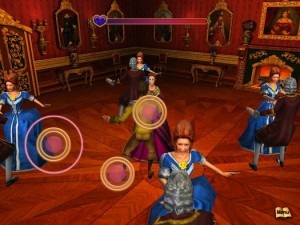 You’ll also get a chance to serve one of four powers in the region or, alternatively, you can disrupt political power through those aforementioned means. It’s hard to get a real sense of this landscape the first time through the game, though, which indicates a larger problem that most simulation games share: Pirates isn’t good at telling you what’s going on in the background and it’s doubly-bad at sharing how to play and succeed in a world that changes and hinges on you and AI interaction.

If my take on Pirates sounds Project Mayhem-y to you, it’s because this is how I choose to view and roll in the world. While the simulation and simplicity of Pirates are two great aspects of a coherent whole, the fact that you can just be a pirate and do your own thing is welcome. Pirates has a deceiving open-ended nature.

Let’s dig in a little bit. A vertical slice of the game would look a little something like this: you’re in charge of 20 men on a scoop, which is a fast and lightweight boat. As you travel along the coast you’ll see cities, all of which give you the option to enter or bombard. You’ll also see boats rumbling here or there and you can attack them one-by-one. 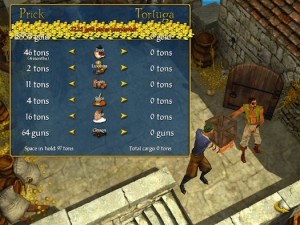 If you do attack, you’ll enter into an over-the-top, instance-based map. It’s man-on-man, the goal being to take the other ship. Depending on the amount of cannons you have, you can choose to either put your boat in a good position to destroy the opponents with metal or you can just ram into it and force an on-board battle. The number of dudes you have in the boat matters, but so do your sword skills. There’s a mini-game that lets you take on the captain of this boat in a swipe-based free-for-all where you pick high, low, or medium attacks or counters versus his own. If you kill him, the boat is yours and so are his goods, which you can sell at other ports for money.

What you won’t see in this slice are the other things: your men expect to earn gold and if you don’t eventually earn enough and break up your pirate party, they’ll mutiny. Also, you need to buy food to make sure they don’t die as you travel to destinations, which you can either (a) sack or (b) visit the governor and receive new titles that boost your fame meter and give you a larger cut whenever you do break up the party. You also wouldn’t see me buying special items to increase my skills, assembling treasure maps, stealthing, killing the Top 10 pirates, discovering hidden locations, escorting royalty, and much, much more. 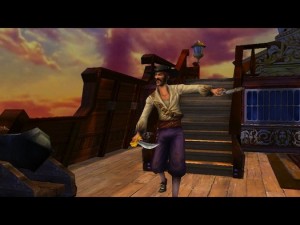 I suppose if there’s a single driver in the game, it’s the assortment of mini-games that you play in order to keep the simulation running. Most are super simple and have endlessly repeating cut-scenes and transitions that come across as, generally, as pretty cheesy. Despite this, I’ve yet to tire of the tasks set before me: they’re breezy, for one, and they also feed into the “one more time” mentality that keeps you up late with other games of this ilk.

While there are some simulation blues — feeling that countdown timer on your youth is a bit depressing and travelling without wind at your back chips away at that like none other — there is a lot to like about Pirates. It’s deceptively deep, riddled with charming animations, colors, and characters, and offers a huge bag of things to do. It also runs well enough and is tuned well enough to recommend it on the iPad, which obviously is a huge plus. I like it, but I admit that it’s probably for all the wrong reasons.

Now, excuse me while I sail up and down the world in service of Dutch dominance just so I can re-sack the towns for the Spanish. Ahoy!