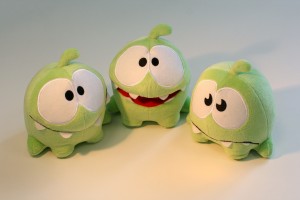 I have a +20 resistance against video games trans-media, but I think I’m going to have to do a saving throw because of these. Toy Wiz, a company that produces Angry Birds as well as Magic: The Gathering, Harry Potter, Pokemon and many more branded toys, is set to produce a line Om Nom plushies for shipment later this October. Om Nom, if ya’ didn’t know, is the lead in Cut The Rope [$.99 / HD / Lite], the fantastic bubble-popping game that stars the cutest monster this side of Alf or that huge duck-thing in that George Lucas flick. No, really.

While we’re on the subject of Cut The Rope, we’ll alert you to this choice bit of news: a set of brand new levels is coming “soon” via a free update. We’re talking 25 levels in total, with new puzzle mechanics and concept art to collect. The package has been dubbed Toy Box.

Alongside this update, Chillingo will be adding in an IAP option called the “Star Key.” After purchased and used, the item unlocks all the sets of levels in the game, essentially ridding the need to collect enough stars to progress further and further.

Before you grumble, remember that this is an optional purchase and probably intended for the uber-casual crowd that just wants to see and experience the entire game without the hassle of… solving puzzles.