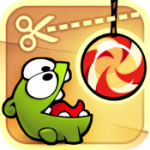 Zepto Labs’ Cut the Rope [99¢] is one of those games that you could tell was going to be something special just by the preview trailer. Much like their previous game, Parachute Ninja [99¢ / Free], Cut the Rope takes a simple and popular gameplay mechanic (in this case, swiping to slice) and turns it in to a game that’s almost impossible to put down.

Cut the Rope begins with a brief cut scene showing a mysterious package left at your door with a label on it that clearly reads “feed with candy." Inside you find a hungry green creature known as “Om Nom" who has an insatiable desire for candy… which oddly enough is suspended inside of his box with an odd array of ropes. Feeding Om Nom through the 100 included levels is a task that is easier said than done once you get past the tutorial portion of the game– especially if you’re looking to clear each level with three stars.

The above trailer does a fantastic job of showing just what is involved in feeding hungry little Om Nom. Basically, each level begins with a dangling piece of candy and our little green friend somewhere onscreen. Initially, all you need to do is figure out which strings to cut in what order to swing the piece of candy in to Om Nom’s mouth. Before long, you’ll need to be using multitouch gestures to cut multiple strings at once, juggle the candy with bubbles, avoid spikes, spiders, and electricity, and many other things.

Like many other puzzle games on the App Store, Cut the Rope has a star system for grading your performance on each level. A single star is easy enough to get, as once you figure out the solution to a level, executing it usually isn’t too difficult once you get the hang of how the physics work. Getting two or three stars involves clearing levels while collecting all of the stars that appear, which often requires tricky acrobatics or carefully timed cuts to swing the candy in to stars outside of the normal path to Om Nom’s mouth. Shooting for three stars seems to take many attempts at the same level, a process made much more enjoyable by an on-screen button to instantly start a level over. 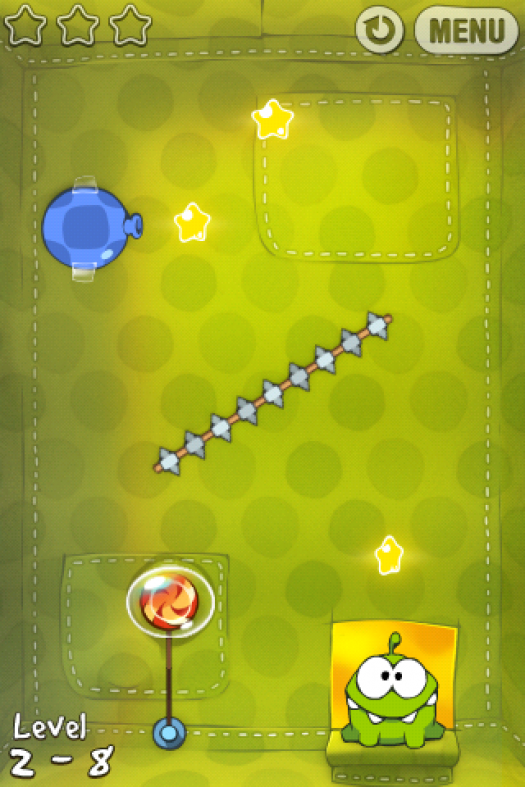 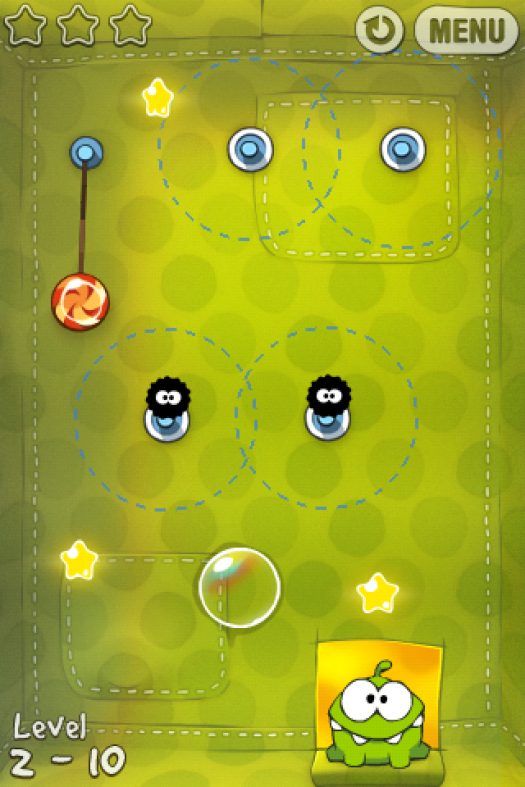 Cut the Rope comes with both Chillingo’s Crystal and Game Center support for online leaderboards and achievement tracking, and according to Chillingo in the Cut the Rope thread on our forums, more levels are on the way soon. You really have to get pretty nitpicky to find things to not like about Cut the Rope, but two things I’d love to see implemented in the future are both Retina Display support and multiple game save profiles to allow multiple people to play on one device. (Currently the only game save option the game has is to flat out delete all of your progress.)

If you’ve found yourself taking a liking to the various slicing games that have taken the App Store by storm, this isn’t one you want to miss. Cut the Rope has everything a good puzzle game needs from a technical standpoint, a lovable mascot, and enough things to do between farming stars and achievements to keep any fan of puzzle games busy for quite a while.